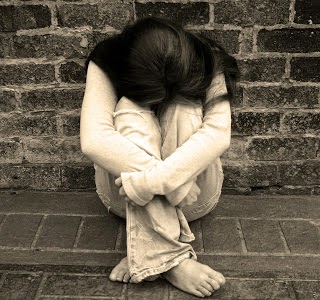 One more day on this topic of Guilt & Shame and today we take the easy subject of SHAME!  I have vivid memories of my grandmother and one of my aunts saying, "SHAME ON YOU!"  Whatever the misdeed, and believe me I was no angel, they were calling down the black cloud of shame to rest upon my shoulders for whatever I had done.  Shame is a heavy cloak, and will begin to drag you down to the basement of low self esteem with even limited wear.  I have worn that cloak of shame--more than I care to admit in my lifetime.  There are still times I put it on--when I am reminded of my status-or lack thereof.

In my reading on shame, I came across these wise words,

"Shame is, indeed, less black and white than guilt. It can plague you because of what you did, what you didn’t do, what others did to you, or what others didn’t do to you. Just for starters.
Shame has to do with your standing before God and your standing in the community. You think you should be unaffected by the opinions and words of other people? Not so. We were created to live in community, and anything that jeopardizes our inclusion goes against who we really are. " Ed Welsh


As I walked away from the World War II Museum in New Orleans, I had this burning need to discuss the shame the German, Italian, and Japanese people must feel when reminded of the atrocities of war and the need to rule supreme. Before we could get in the car, I had already come full circle and remembered the shame I bear as an individual, as a citizen, and at the top of that list as a Believer.  SHAME ON ME!  For just what Ed said above---for what I did and what I didn't do.  How can I consciously walk away from this thick and cumbersome cloak of shame--when the tapestry is tightly woven with my sin and the sins of my forefathers.  I dare not cast a stone in the direction of anyone else--until I get my own act cleaned up.

And then---I was reminded.  After World War II, our armies occupied the countries that had sought to rule over us--killed millions of people--and caused some of the worst atrocities against mankind ever witnessed.  We ruled over those countries with the intent to rebuild them, find the good in them, and replace the evil with the right.  We ruled with grace--not intent to punish all those who bore the citizenship of those countries--but only those who knowingly and willingly lead others in a mad rampage against the world.

My father in law served in occupied Japan.  He was drafted at the close of WW II and the Japanese surrendered as his ship made its way toward the fighting.  While serving in Japan, he told the story of men begging for food--starving men--trying to feed their families.  We did not put razor wire around the entire island of Japan---we worked to redeem and reshape the country into the great country it is today.

SO when I drag out my heavy cloak of shame from the closet---I need to remember what God has done.  He has cleaned the cloak and made it white as snow.  Free from the dirt of guilt and shame, it has become a cloak of redemption.   The next time I feel a twinge of shame---I need to regroup--determine why I am feeling shame and do something about it.  Move forward on the right path and without the heavy cloak but instead the robe of redemption----headed in the right direction without guilt or shame along for the walk!

Looking to Jesus the author and finisher of our faith; who for the joy that was set before him endured the cross, despising the shame, and is set down at the right hand of the throne of God.
Hebrews 12:2