Our final full day is spent taking a fast paced tour of Berlin--via subway and feet.  The guide for the day is the best guide we have the entire trip.  Lee is an ex-pat who has been in Europe since his late high school years.  Now married and with a 16 year old daughter, he has been here a long time--including before the wall came down and was a wealth of information presented with a dramatic flair.    His insight into the feelings of the Europeans toward Americans, the aftermath of World War II, the fall of Communism, and the European love affair with soceer are highly entertaining.  Add to this a history, geography, economics, and culture lesson and my brain goes into overload.

One of the most fascinating things about Berlin---it was almost entirely destroyed during World War II--but it has been restored with great attention to historical detail. 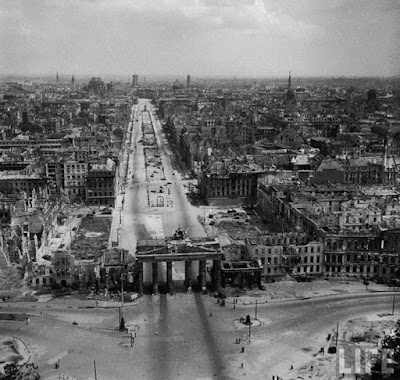 We stood on this very avenue-and there is no evidence of any destruction today.  The Brandenberg Gate is now surrounded by embassy row. 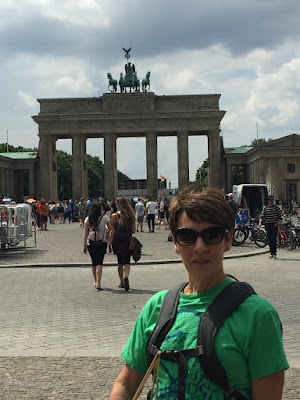 The day included a trip to museums, castles, Berlin Wall Memorial, and Check Point Charlie to list only a few. 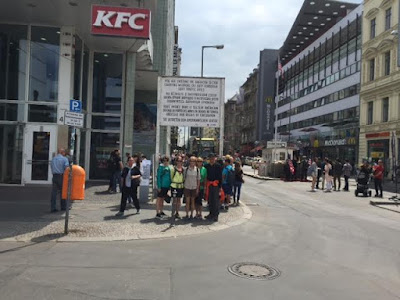 I got a great laugh out of the KFC being the first thing you come to when crossing into West Berlin from the East.  Lee told us during the years of the Wall you were allowed to enter on a day pass to the East for $15.  If you were not back at midnight--you were in BIG trouble.  He relayed a story of a citizen from the West married to one from the East.  It seems he walked, sometimes in his bathrobe, across to the West every night just before midnight and crossed back into the East just after.  This seemed to be pretty bizarre, but sometimes truth is stranger than fiction. 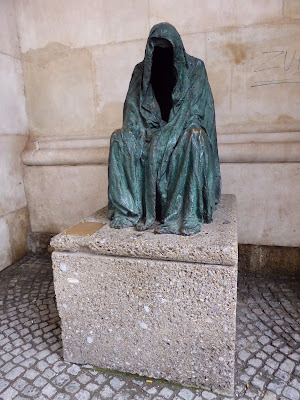 I leave you with this last picture -"Central Memorial of the Federal Republic of Germany for the Victims of War and Dictatorship"  It spoke legions of the horrors of hatred and war.

On the long 24 hour -Berlin to Paris- Paris to JFK- JFK to DFW-trip getting back to the Good Old USA, I had plenty of time to reflect on all I had seen and heard.   I thought of the wonder of God's inspired creation, the indomitable spirit of endurance in mankind, the beauty of grace and forgiveness when faced with the horrors of evil and hatred, and the hope for a better tomorrow which springs eternal in man.  It was truly the trip of a lifetime.

My soul, wait in silence for God only, For my hope is from Him.
Psalm 62:5