EVERYONE NEEDS A DAY OFF

I read a great deal of historical fiction and love "Downton Abby" (not quite as much this season as previously though).  I began to notice a pattern---even the nanny gets a half day off.  I  gently shoved that idea on the  table at #1 Daughter's home and WAA LAA it happened.

The first time was truly a half day-12 hours. #2 son came for the weekend to meet the princess--so I bolted out the door before he had scraped his shoes off on the door mat.  It takes thirty minutes to drive to my house so there went an hour---30 minutes for a good bath---and 10 1/2 hours sleeping.

This day off has turned into 28 hours when Dr. SIL had the rare day off.  I collapsed on my bed and slept 3 hours as soon as I got home.  THEN I began the task of catching up.  It seems that MANY things slide into the column of I will do that later when you know The Little Man will be up at 4:30-5:00.  After everyone is in the bed, the dishes are washed, tomorrow's lunches ready to be prepared, a load of laundry in the washer and the dryer, I head for the bed myself.

I have learned that a 5 minute shower is plenty to get the top layer of spit up, sticky, today's meals, dirt from the boys' excavation site in the back yard, and any other of sundry substances I have come into contact with during the 15 hours since I got up.  Everything else can be put off---until Nanny's Day Off.

I have shaved my legs--well in truth first I had to cut a little length off the hairs and then shave since I have not had my razor out of the bag since arriving at #1 Daughter's house 2 1/2 weeks ago.  After my long soaking bath to accomplish this--it took about 30 minutes to clean out the tub.  HEY--I am SMOOTH now!

Then there were the eyebrows who had been cast in their own production of 50 shades of gray.  Ms Clairol #12 fixed that problem--but then you could see all those stray brows.  Out came the tweezers.  Proud to report---you can now see I DO have eyebrows and all the wild hairs have vamoosed!

After sleeping 10 hours---it was time for a shower to wash my hair which had accumulated enough product during the week to allow it to stand as stiff as a board--straight out.  I have now officially been in the bath more minutes in one 24 hour period than I was for an entire week.  Happy to report I will begin this next stretch of Nannydom clean.

My nails---Well Scarlett, I will think about them tomorrow!  I did actually get a layer of make up on and my clothes are clean and I am rested. 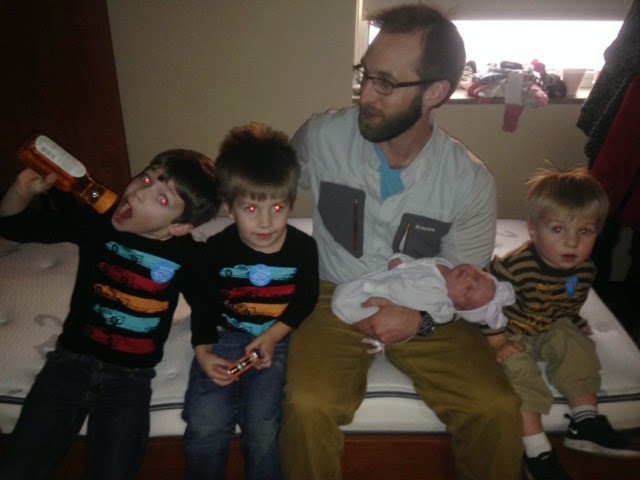 The Princess and Her Knights

What I am left wondering is HOW IN THE WORLD DOES SHE GET ALL THIS DONE?  I raised 3 only children--they were born in three different decades-and one was pretty independent before the next came along.  This notion of having 4 babies in 5 1/2 years is only for the super woman.

I have an entire group of posts coming, once I resign my nanny position, of Living in the Land of the Little People.  NOT for the weak or faint of heart--the realities of day to day life with four children in your space make for an interesting story.  I am nominating my daughter for Most Courageous---for it truly takes courage to pull this off and keep smiling, laughing, and loving what you are doing.  She is MY HERO!
Posted by lulu at 6:00 AM