LESSONS FROM THE LITTLE MAN

The sweet look of innocence we all have while sleeping- 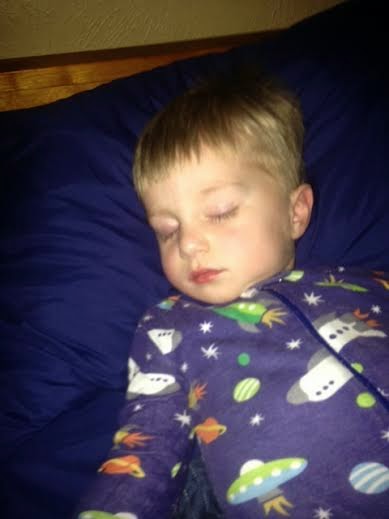 Have I ever mentioned The Little Man is two---YES--TWO---I know it all--have discovered a mind of my own---want to try it all--do not understand the word, "NO!"--been here a full two years independent man-child.

I must admit I have to bite the end of my tongue to not say, "Because I said so."  After all that was the reply I raised my children on--perhaps better than the fear  to ever question my parents.  The explanation if I had questioned their directives would have been  more physical than verbal.  So perhaps with generations we are improving our parenting, we can only hope.  When he questions, WHIIEE--I explain why---the danger of the traffic, the harm caused by hard objects hurled at great speeds, the danger of the shelves turning over on you, the sick stomach an entire bag of chocolate will create, how we would hurt someone if we knocked them down, how the snake might bite, and the bumblebee might sting.  A lesson in cause and effect which hopefully is sinking into the stubborn two year old brain.

Sadly I find my mature brain also asking the question---WHY?  When I look around me and see the suffering and pain so many are enduring; when I see the homeless--poor--destitute standing with empty stomachs;, when mothers loose children; when children loose mothers;, when entire families-towns-counties are destroyed in fire or storm; when nations rage against nation; when citizen attacks citizen; when there seems no end to the suffering---WHY?

I have no answer to my "Why?".  I do have God---and know who God is--know His character--and that He loves us individually--limitlessly--eternally.  Obedience to His directives by doing my part--whether in service or prayer and most important trusting---having faith--believing it is not without cause and He has a good purpose.  I must learn to obey and trust and turn my whys into "Thy Will"--not mine.


More than that, we rejoice in our sufferings, knowing that suffering produces endurance, and endurance produces character, and character produces hope, and hope does not put us to shame, because God's love has been poured into our hearts through the Holy Spirit who has been given to us.
Romans 5:3-5
Posted by lulu at 6:00 AM