CITIZENS ARREST!!!---HERE IN THE HOOD

I LOVE living on the edge of the downtown--an old neighborhood--front porches--swings--big trees--neighbors so close you know when their bathroom light goes on.  Watching the comings & goings---watching the children growing--hearing all the neighborhood drama.  IT IS ALL GOOD! 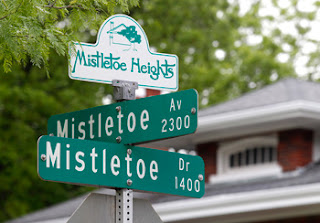 BUT--with close proximity to downtown--comes questionable characters wandering The Hood at times.  What these characters don't seem to realize is someone is always awake---and someone is ALWAYS watching.  We live on the edge of the Trinity Trail--but you have to take a path leading through questionable territory to enter the trail.  I NEVER walk alone at night down this path--and have even had questionable encounters in broad daylight.  This path seems to attract the local drug salesman--and I am NOT referring to our favorite pharmaceutical sales people.  These shady business deals are not the only dark activity in The Hood.  It seems our homes are being cased for the possibility of robbery quite frequently.. They like to steal really valuable stuff like your plants and lawn furniture---

ALL this clandestine activity, leads to an active self deputized "Citizens Posse", who consider it their DUTY to protect The Hood .  A flurry of emails began flying recently.  A car "which did not belong" was spotted with dented and prime painted fenders and no driver visible--only a passenger slunk down low.  OH--it was LATE at night--I had already gone to bed.  One neighbor spots them, another neighbor makes the block to get the license number, and still another neighbor here in Mayberry  The Hood gives pursuit to the perpetrators and chases them out of the area.  The police were called---but the suspects got away. 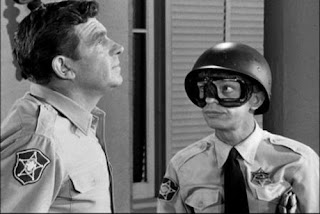 Fast forward to the next night---OH YES---I have already gone to bed (HEY I HAVE BEEN GETTING UP AT 4-5 AM)---and the car is spotted on my street--a few doors down.  OBVIOUSLY these characters are NOT geniuses since they come back the next night and only move over a couple of streets.  The emails fly--the police are called, Andy & Barney  the neighborhood patrol car arrests the perps, search the car, and tow the vehicle, while the posse neighbors stand on their porches watching.  Said neighbors then report by email to the entire citizenry of The Hood the satisfactory result of the arrest.

Moral of the story--

DONTCHA BE MESSEN ROUND IN THE HOOD!