For all of you who are in a state of denial concerning your mental illness diagnosis, it might be best if you turned the page and went on to your next blog---you will not be able to relate to what I have to say today.  No offense meant--and the state of denial can be a blissful place--so feel free to park yourself there permanently-but most of us live on the edge of crazy!  I took up residence in a state of confusion a LONG time ago and as my counselor friend informed be--our crazies grow with age. 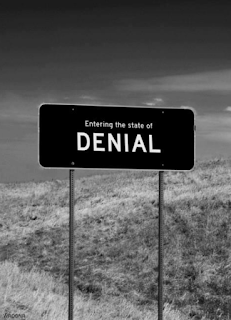 We live in a world slap silly over acronyms--and the Land of Psychobabble may be the guiltiest of over use.  For most of my early years, all mental diagnosis were captured under one ailment--Crazy.  And when you went Crazy---you were pronounced to have had a break down.  This gave the resounding ring of a car which would not run after it quit running-so it needed to be worked on and fixed.  "Crazy" is not really a very lucrative diagnosis--SO--after the initial step of identifying and categorizing all the types of crazy--it was further refined to acronyms.  NOW they were on to something---the more letters---the crazier you were---and the more the treatment cost--DING DING!

Included in my own colorful array of diagnosis is

OCD---obsessive compulsive disorder--now to clarify I am no Jack Nicholson in "As Good As It Gets", but I have my moments.  Truly it is the rest of you people who are wrong---for there is CERTAINLY A PLACE for each and everything in our lives--and all is right with the world when things are in their place and done in the correct order.  AND what, might I ask is wrong with cleanliness--after all The Good Book tells us that it is next to Godliness.  Schedules help us keep things in the correct order and the correct order helps us stay on track--WHAT could be wrong with that!  I have used my OCD well over the years---no need for plates in a super clean house-you can eat off the floor--clothes stored by color, type, and frequency worn---spices in alphabetical order---pantry organized by food type--you get my drift---things are easily found when in the right order.  When I find myself edging too close to the land of crazy obsessive---I self inflict desensitization by living in messy until I am better.  If I find myself brushing my teeth after every snack, I only allow use of the toothbrush three times a day--best diet I have ever found!  SO yes, they would have you believe OCD is bad--but it is my old and dear friend which has served me well.

PTSD--Post Traumatic Stress Disorder--after a really difficult period in my life, I found I had entire blocks of time which I had no memory of.  I became concerned I was developing dementia--but my counselor friend explained I was suffering from PTSD.  As I looked through the symptoms, I discovered this was one of many of the disorder markers I had.  I finally reconciled myself this was a gift--not remembering was a blessing---disturbing and discombobulating, but when viewed from a pragmatic viewpoint--a blessing!  Who wants to remember a horrific nightmare?

Over my lifetime I have met others with varying diagnosis including-

MPD---multiple personality disorder---some of you may think this is near the edge of unreason, but I beg to differ.  I had a client during my professional career who claimed to have suffered from MPD.  As we talked, I began to see a pattern, the "Other" personalities were the bad-doers who had taken over her "Good" personalities without consent or her knowledge.  One of these "bad" persona's got up in the middle of the night and ate---LOTS OF FOOD!  It was not her fault if she had a weight problem--for she didn't even get to enjoy the over-indulgence done in the dark of the night.  Another of her personalities was not very nice to others--in fact--might even be called verbally abusive.  So if you are really mad at your best friend---let them have it--and claim you don't remember a thing--the other you did it!  I can see how this diagnosis has a beauty and charm of its own---a reason for all bad behavior!

Phobias---fear of leaving home, fear of snakes, fear of water, fear of strangers---any unreasonable fear which paralyzes the sufferer is a phobia.  I was inadvertently treated and desensitized from all my phobias by being raised with brothers.  IF YOU DARE--show fear--they will torment you for your entire life with the knowledge of what you fear.  The only thing worse was telling Momma you were afraid of the dark--the monster under the bed--whatever--she was a firm believer in helping you to conquer your fears by insisting you face them.

AND then there is the biggie---Depression--surely we all suffer at some point in our lives from depression---The Blues---as it was known during my early years.  I remember those who had to "Take To Their Bed"--for it was not understood during those times and no one knew what to do for it.  Depression in itself is not bad---it is when you can no longer function in a normal day to day world that it becomes a problem.  Drugs to treat depression are a huge business.  Our fast paced-highly competitive world would depress the staunchest personality.  My personal drug of choice to retard any signs of depression is exercise.  Get those good hormones going to run off those bad boys!

NOW---I am NOT making light of mental disorders---I am making light of my own diagnosis---and reminding us all---there is no shame in being a little crazy.  Here in the South, every family has their crazy and I am proud to be the senior martiarchal crazy of mine.  Why in fact--my crazy has proven to serve me well--be a tool to keep me from actually going over the edge.  Life has taught me---laugh---laugh---and laugh some more---even at yourself---things always look better with a little self deprecation and a good laugh at yourself!  Embrace those crazies and love yourself--it goes a long way in making the world seem right!

A joyful heart is good medicine, but a crushed spirit dries up the bones.
Proverbs 17:22