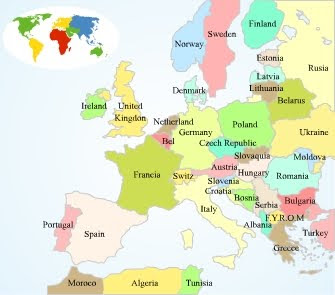 I cashed in all my credit card points a year ago and bought a ticket to Europe for this summer's adventure.  After months of planning and saving my pennies, our little group took off for five countries in three weeks and the adventure of a lifetime.  I came back with lots of notes and thoughts garnered from this wonderful adventure.  The days to come will include tales of adventure as well as thoughts which bubbled to the surface while away from 76110.  I found life strangely similar, yet strikingly different while across the pond---and it all began in

My adventure began with arriving a day earlier than expected.  Two of the group had arrived in Amsterdam two days before the other four.  Somehow in monthly airline schedule changes over ten months, my ticket was changed an entire day earlier and I did not catch it---nor did anyone else as I sent my schedule to the group leader several times.  It can be quite daunting to fly alone--especially internationally--but I was counting on meeting one of the other group members at the airport to find our way into the city after landing.  What a SHOCK when I texted her from Detroit to ask her arrival time to find out it was the next day!  To top that off, since international cell communication is expensive--even with an international plan--we all turned the cellular data off upon arriving in Europe.  This meant unless the other two were on Wi-Fi--it might be difficult to contact them.  With the directions given by the first two explorers, I manage to get the train into the city.  The fun then began as this is a huge city and the next instruction to veer right was somewhat ambiguous.  I text our fearless leader--who thankfully was awake.  She responds to not worry when I get there tomorrow they will meet me at the train station.  When I respond, I am here, she answered---"IN AMSTERDAM?"  They launch their jet lagged bodies out of bed and throw on their clothes to walk over and get me.  The walks were never a stroll around the block and certainly not with a backpack and carry on in tow.  Thankfully my wandering is delayed for another day as the troops came to rescue the lost. 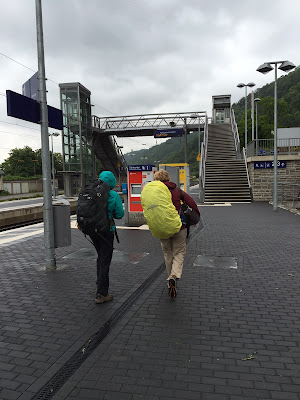 Supposedly the secret to recover from jet lag is to keep on going on the new time.  After not sleeping on the plane, that was a tall order!  After a traditional pancake--which more closely resembles a crepe, we set off for some sight-seeing.  Walking through the China Town and the Jewish District, we explore the Jewish Museum and the very new Jewish Holocaust exhibit.  Word to the travelers---the Holocaust museum consisted of a series of paintings only---it is just getting off the ground. 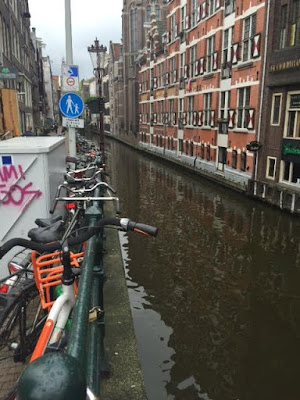 Of those things which really struck me about Amsterdam were the canals (which we will talk about in another post), the bicycles (same for this subject), and the houses.  As in most cities, including Fort Worth, real estate in the city proper comes at a premium price.  Thus you find the houses built vertically. 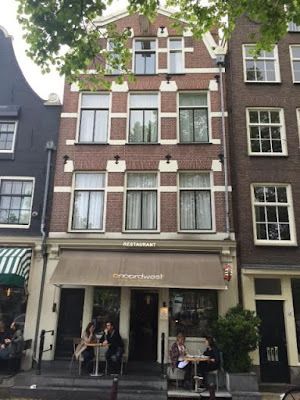 This is the apartment building we stayed in while here.  Downstairs there is a restaurant, and the door on the left of the picture leads to the apartments upstairs. 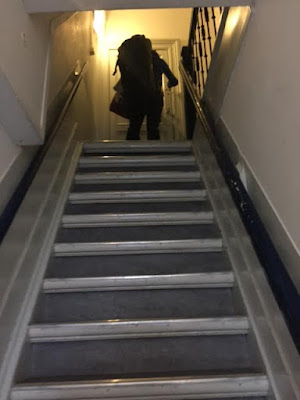 Since our apartment was on the third floor, this necessitated a steep-narrow climb.  Remember, there is 20 + pounds on my back and another 10+ in my carry on-thankful for the assistance of my buddies.  I have a flash back to the Maroon Bell Loop in the Rocky Mountains, while climbing the stairs.  And those who live in the city carry their groceries and anything else needed for living day to day life up these stairs.  My admiration for the citizens of Amsterdam rose a couple of notches! 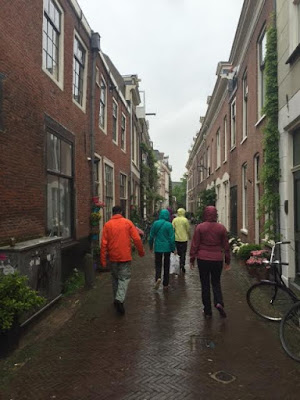 If you look on the left side of this picture above, you sill see what looks like a pipe sticking out.  Every building has one of these or some sort of hook at the top.  They are used for hoisting up large items such as furniture.  It is pulled up and through the window. 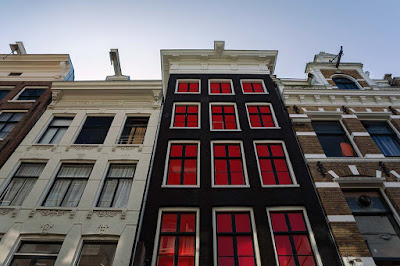 As we walked and gawked in the city proud to boast of being the most liberal city in the world, I was reminded of my relationship with The Father.  As I grow in Him---and move upward--closer to Him, it can become harder.  The things of the world lure me and entice me to the easier path of staying on the ground floor.  The climb up is not easy---but the view from the top---is so worth the effort.