I fear I have given you all the wrong idea about who I really am.  The not so pretty truth is my halo is tarnished and dented, my wings lack lift off, and my feet are made of clay. 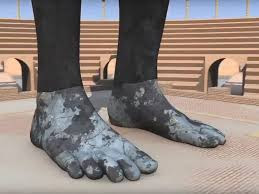 If I were a good politician, I would never admit a character flaw to you and the press reports would all be favorable. Politicians and salespeople know the importance of image management.   The truth hurts--but the truth will also set you free.  My attitude was not only not entirely God centered while in Louisiana, but the last day I found myself in a struggle between His will and mine. 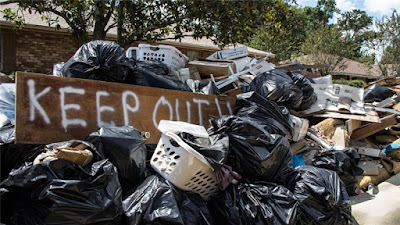 The last day--the last house--proved to be my piety downfall--straight into the gutter of disgust.  The house was in a government subsidized neighborhood with very narrow streets and huge ditches in front yards.  The first glimpse of trouble came when I spotted trash literally piles of trash all over the place--not only the piles of belongings as shown above, but yards filled with stuff.  Dishes, trash, cutlery--all forms of things strewn about the lawns.    As I opened the car door, the smell slapped me in the face---refrigerators and freezers had been hauled to the street--full of food and open--not taped shut as required.  The stench of three week old rotted food literally gagged me. 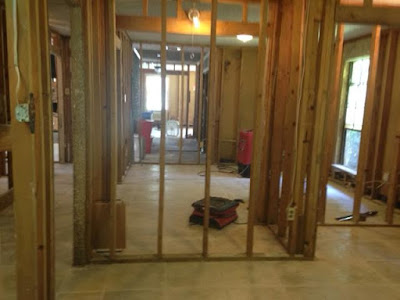 The job supervisor knocked on the door of the home owner who was staying in a 5th wheel trailer in the drive.  The owner told the supervisor what he wanted done and shut the door.  After touring the job, the supervisor once again knocked on the door and asked for some clarity about what he wanted hauled to the street and what was to be packed.  The owner replied to pile it in the yard and his son would go through it.  Finally after some conversation, he came out and sat in front of his house and said yeah or nay to what was to be chunked.  My task was to pack up the kitchen cabinets which three weeks later had food still stored as well as mold growing in the dishes.  The mold was growing mold and the smell was unbearable even with a mask. 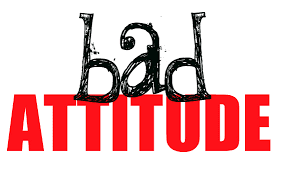 In walked my bad attitude and grumbling.  With no thought of what it would be like to have suffered this devastation, I was not happy with the owner.  We had been met with gratitude and thanks at every other job, but here we seem to be taken for granted.  What else can you do for me?  How about spraying for the mold.  The supervisor was most gracious and told the owner the steps to apply for this further help--while I was in the background mumbling to myself.

Later that day, I was forced to revisit my attitude and my lack of compassion.  I am human---gratitude motivates me---and I become disgruntled when I detected an abuse of aid.  I have had to back up--ask for forgiveness--and remember why I was there---to serve.  The human side of me took over that day---and though God can use every thing for His good---I can sometimes make it harder than it needs be.

So--remember, My Friends, I am no saint, in fact my dear ones might tell you far from it.  God though can take even fallen man and use Him for His good purpose.  The best news--though my feet are of clay--my heart belongs to Him.  I am confident He will continue to stretch me and grow me---as He draws me to the foot of His throne while upholding me with His hand.

Today's post is the last in the flood series.
Posted by lulu at 4:00 AM