BEHIND THE VEIL OF SECRECY 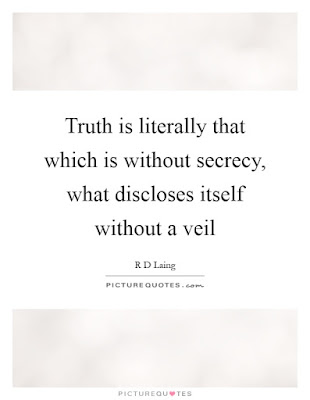 Recently a long kept secret was revealed to me--by a series of occurrences which played out over a number of years.  I am still in disbelief.  I have spent a great deal of time thinking over the truth and trying to decide what to do with it.  It was a huge game changer in my life and now what do I do with this truth?  Is there any benefit to revealing this information to anyone beyond the extremely small circle of those knowledgeable?  This long kept secret--has thrown a big kink into the truth I thought I knew and the actual  facts.  Why would anyone keep a secret for decades?  I was spared the truth hoping to protect me and perhaps in a sense of shame.  Truth will not be denied its day to shine.

What I have learned from this entire story is there are never really any secrets.  We are told in The Word--all will be revealed and we also know God is all knowing so our desperate attempts to live behind a cloud of secrecy is futile at best.  The most disturbing fact is the far reaching repercussions are often devastating for those in the sphere of influence of the one hiding behind the bush of deceit.  I stand in testimony, though it took six decades for the truth to catch up---the truth all came bubbling to the surface with one innocent question that I never imagined would have  an answer.  I had asked the question quite a few times to a number of people--with no answer.  A brief conversation with one I never dreamed would have the answer was the pivotal point in the revelation of truth.  The truth ALWAYS comes out!

If you can not do it in the light of day, if you can not say it on a stage before the world, if there is a need for hiding behind the veil of secrecy--DO NOT DO IT!  Live the truth in the full light of day--with a crowd of witnesses as your backup. 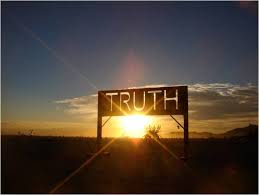 Anything done with the fear of exposure is not worth doing and will rain destruction upon those involved.  The cover of darkness is always temporary and the light of truth will always shine.  Live the truth!

“So have no fear of them, for nothing is covered that will not be revealed, or hidden that will not be known. What I tell you in the dark, say in the light, and what you hear whispered, proclaim on the housetops. And do not fear those who kill the body but cannot kill the soul. Rather fear him who can destroy both soul and body in hell.
Matthew 10:26-28