I am back from my hiatus, and it should not surprise you I have stories to tell. 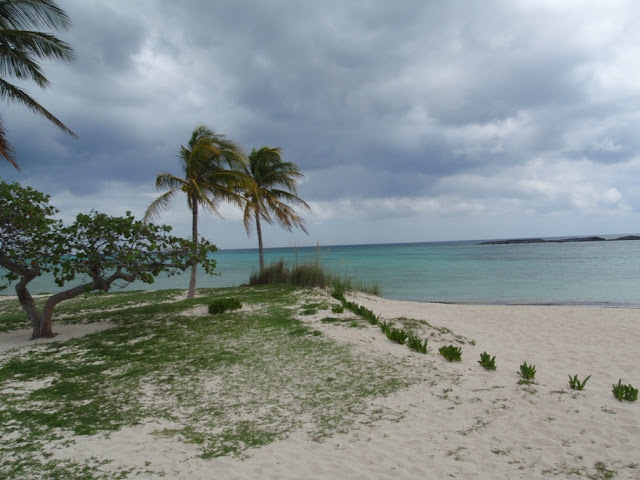 One of the days we were gone, was spent snorkeling at Deadman's  Reef at Paradise Cove.  Am I the only one who thinks perhaps there is a slight disparity in these two being one and the same place?

It was a beautiful day-but the wind blew 15-20 MPH the entire time we were in The Bahamas.  This leads to high waves and strong currents.  NOT to be deterred, we chose the option of being boated out to the reef and signaling for a ride back when finished.  The one catch is there is one place and only one place to get out of the boat and back in again due to the coral reef fragility.  Having snorkeled at the same reef last year, we chose to go it alone---without a guide.  We listened to the safety and information lecture before shipping out, and perhaps we did not pay as much attention as we should have.  In our defense, the instructor was difficult to understand and who wants to continue to ask for a repeat only to not understand again.  AND perhaps we were a little over-confident!

We all slipped out of the raft, adjusted our equipment, and decided upon a path.  Having been warned to stay together, and since some unnamed party did not follow these instructions last year, we did a great job of keeping track of each other.  We were heads down, snorkels up, and fins flapping off to enjoy the sights. 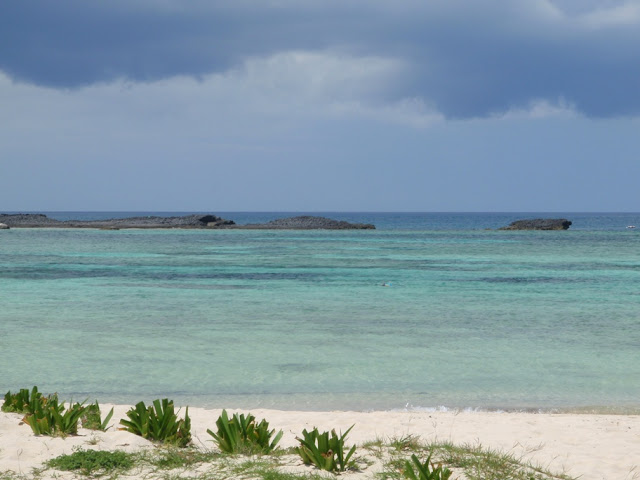 You can get a good perspective of how far we were from the shore by the snorkeler in the middle right of this picture.  The big reef in the middle of the picture is where we were left.  We somehow missed the message to go to our left and headed off to the right to another protruding reef out of the picture.  The trip out was wonderful---OH GUESS WHAT---we were going with the current.  Fish swam up to our masks and were close enough to reach out and touch (we didn't) and the bottom is covered in coral.  Wonderful sight seeing!  The goal was to reach the buoy at the last protruding reef and rest before heading back. 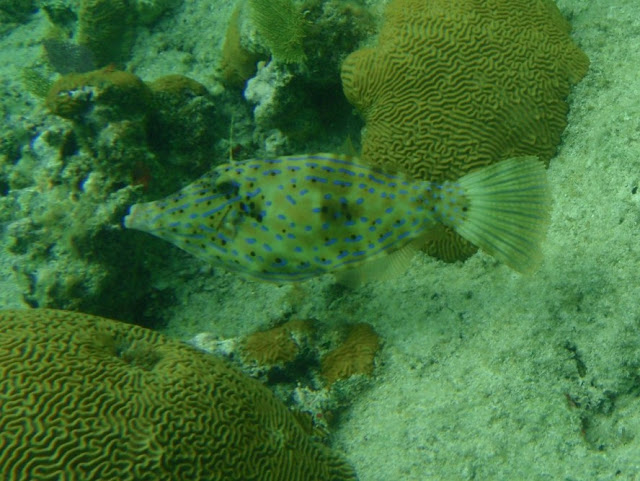 Unfortunately--there was NO buoy when we got there.  Later we were told they had picked up all the buoys since the conditions were so rough.  We turned back to head to the drop off spot.  The trouble began immediately!  We had to swim back against the current and with waves breaking over our heads.  Add to this the leaky masks which need clearing occasionally by pulling your head up and the fun began.  Every time you surfaced, there was a rolling wave slapping you in the face.  We finally learned to turn on our backs to rest or clear those masks.  Even this did not always work, since some of the waves were so large they would crash over your head.  As I swam I would spot a mark to swim toward in front of me to keep going in a straight line in the strong surf.  It became quickly evident progress was incredibly slow.  We all swallowed an gut full of salt water and struggled as we continued toward the mark.

The raft driver finally came out to check on us and informed us we had to make it all the way back.  There was no way to get us in the raft until we were in the shallows around the reef.  IT WAS A STRUGGLE!  All because we missed the part in the instructions about going the other direction.  Had we followed those directions, we would have been swimming with the current when we headed back to the pick up spot.  We missed seeing the sea turtles--they were in the direction we were told to go.  We were totally exhausted--because we headed the wrong way.

We made it--thankfully--but it could have been so much easier--so much more scenic--not nearly as dangerous---if we had followed the instructions!

So it is with life---we have the Book of Instructions---it tells us the way--it gives us the rules--it is the map to guide us on this terrestrial ball.  We DO HAVE to read it and heed what it says!  And yet, we all get over-confident--think we have this under control--only to discover we are in WAY OVER our heads and struggling to keep going.  It all could be so much more simple---not nearly the struggle--a pleasant trek--if we only followed the instructions.

Until I come, give attention to the public reading of Scripture,
to exhortation and teaching.
I Timothy 4:13
Posted by lulu at 7:00 AM