SOMEONE'S KNOCKING ON THE DOOR

Summer has finally shown up and with a vengeance here in Fort Worth.  Hot and humid, I tend to do all my outdoor activities early in the morning or late in the afternoon.  Recently I was sitting inside posting, after an early morning exercise session, when I heard a rapping on the storm door-not a loud rapping, more of an insistent calling. 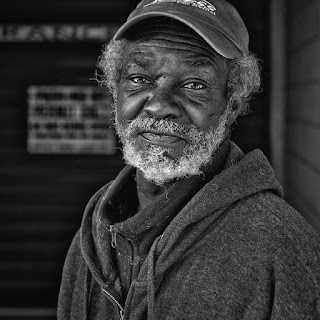 As I opened the door, I was greeted by a small old man~ obviously a homeless person.  Short in statue--slight in build--he never the less took off his hat and put on his best manners.


"Ma'am, I was wondering if you had any yard work I could do for a few dollars?
I am completely broke and am willing to do any work you might have ~
I just need a little money to buy a meal."

Now I had spent the entire afternoon the day before working in the tiny yard.  It seemed pretty obvious--at least to me--that the yard needed no work.  He was so pitiful though--and I have a soft heart for the homeless--so I gave him a few dollars.

Perhaps an hour later, I left to run to the nearby grocery story.  Who should I see a little over a mile away, but the same homeless man standing at a light with a sign--needing money.  He did not recognize me (make up does wonders), and I did not wish to cause him any embarrassment ~ so I drove by without acknowledgement. 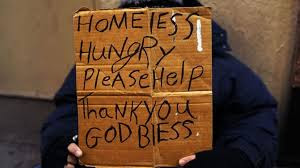 As I made my way home, once again--the same man is on the opposite one way street ~  same sign--same message---working the street.

Perhaps you think I should be angry.  Not in the least!  My responsibility is to help those God places in my path, not to be the "Honesty Police".  If someone is willing to humble themselves to the point of living on the street and begging for money--  Well I am not their judge.  If you pause and think about it--he is working--it is hot--miserable--and he is trying to persuade some of us to help him by pleading his cause.

trying to make Fort Worth my home.  Though no one has been so rude as to slam a door in my face --many-many times my knock has been ignored.  At best the door was opened - they were polite - but not interested.  I have come to recognize the reasons for this are legion--but the fact is most are not willing at this stage of life to open their world  to new friends.  Doors stand closed with no solicitation signs posted.

My point for today is two-fold, for you see there are two main characters in this little story--and they both stand at the door. One is knocking and the other is on the inside with the key to admittance.

Never be afraid--hesitant--unwilling to knock on a door.  A golden opportunity may await you a step away.  Until you rake up the courage to approach the door and knock, the door will not be opened.  The opportunity on the other side of the door will not pursue you--you must pursue it.  What is the worst thing that can happen?

Neither of which is fatal.  Nothing ventured--nothing gained.  So GO AHEAD ~

KNOCK ON THAT DOOR

Second point--when you are on the inside --answer the door.  Being one who does not believe in co-incidences---when someone knocks on my door--God has a reason for that encounter.  I am not deterred or discouraged in mankind when someone violates my trust by not being honest with their circumstances.  God is using me as a conduit for his mercy and grace.  God has not called me to be His judge.

It makes no difference which side of the door you are on--there are golden opportunities on each side.  Go ahead take a chance and be prepared to be blessed!