Day 5 of our "Excellent Adventure" and the last day on the USA side of Glacier Park. We had to travel today to reach the Canadian side of the border, so we opted for a short hike of 8 miles to Grinnell Glacier. To shorten the walking part, and give our legs a break, we purchased boat tickets across Swift Current Lake & Lake Josephine. Since we had already hiked these trails the second day of the trip, we did not feel the need to be redundant. Once we unloaded the boats after Josephine, we joined a ranger led hike up to the glacier. The ranger was a "Seasonal Ranger" who also had just retired from school teaching. Both of the ranger led hikes we participated in proved very informative. The only problem with today's was that after a few miles, we decided we needed to get on up to the glacier since we were pushed for time. This led eventually to the bear encounter since we were the first group up the trail.

This proved to be another beautiful hike with long trails on the ridge line and the edge of the mountain. We had to hike through a waterfall which proved wet. On the edge of the cliff there was no way to escape the water, thus wet feet and then blisters under toenails.

On the way up the trail, we came upon "Mary, Queen of the Trails" as dubbed by the Ranger. Mary was a 35 year employee of the Forest Service who SHOVELS the snow off the trails after the dynamite has made the initial clearing. She was a woman of few words, but we all thanked her for her service profusely!

If you missed the story of "The Bear" go to STAY CALM!!!!!!!!!! to read all about it. One of the things that I forgot to mention was Jim fumbling through his backpack after discovering the bear to find his telephoto lens. THANK GOODNESS the bear decided to have a little roll in the snow before heading toward us. OK, FRIENDS, REMEMBER THIS-there is no record of a bear EVER attacking a group of 4 or more hikers. DO NOT LEAVE YOUR GROUP! The next day, as we were hiking, I told Babs that I was behind her and she was in deep trouble, because I would not let her turn around if we encountered a bear today. In a VERY serious tone, she informed me she would knock me down! WELL!

After the encounter and then heading back up the trail, we came to the Glacier Lookout. STUNNING! You are able at this point to step onto the glacier, but they strongly discourage it. Good citizens that we were, and since we had already had plenty of excitement, we obeyed the rules. Grinnell & Salamander Glaciers were once one big glacier, but the climate warming has melted them and they now are the two. Salamander is named for its shape and its shape is now beginning to melt. Grinnell was the man that discovered this beautiful area by horseback MANY years ago. There were several landmarks in this area named for him, but appropriately so.

On the way back down the mountains, I managed to slip down in a snowfield. Thankfully we were not on the edge of the mountain. I did provide Sonja with a good laugh! Another beautiful hike, but heavily populated by the time we started back down the mountain. It is always smart to start as early as possible, but not too early since the bear warnings are particularly strong early and late in the day.

We then drove to Waterton, Canada for our last day's hiking tomorrow. A beautiful drive, but with a van packed out with gear a little crowded! Think about this, we have had 5 days and seen a bear or bears-EVERY DAY! Last year's hiking trip, in Banff territory, we only saw one bear and that was on the side of the road. Will we see a bear on our last day? Stay tuned tomorrow for the exciting conclusion of our "Excellent Adventure." 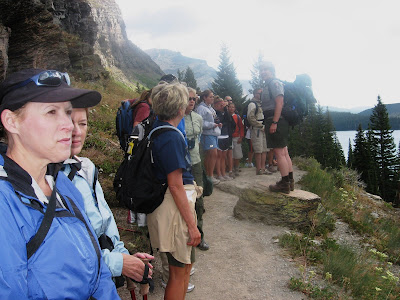 The Ranger giving us a talk on the area while we intently listen. 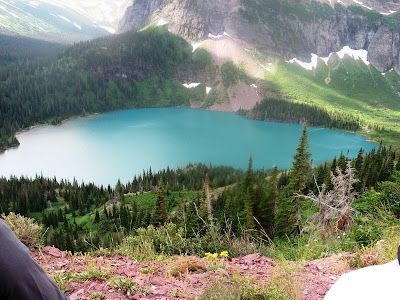 The lake at the beginning of the hike. Lake Josephine 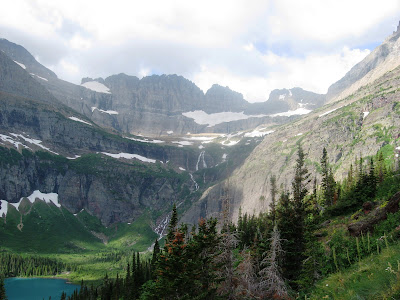 The Grinnell Falls are in the center of the picture. 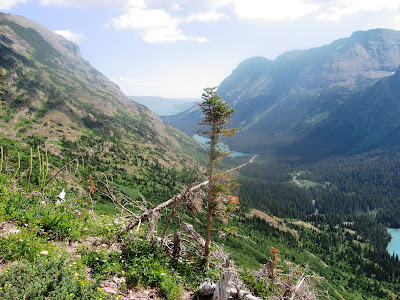 Now you see two lakes as we keep going up. 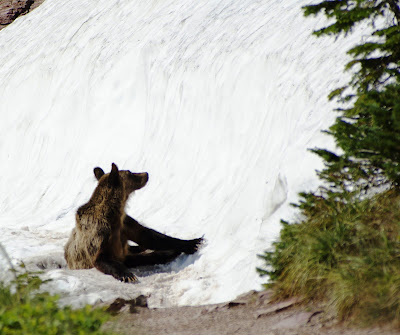 And THERE HE IS! Look closely and note the length of the claws. This is just after I rounded the corner and looked at him and he looked at me. He decided to have a little snow roll while pondering his options. 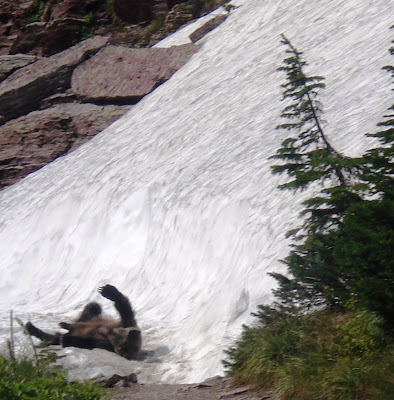 Obviously all that fur is hot. He seemed to really enjoy the roll in the snow. What you cannot see is the drop off just to our left. 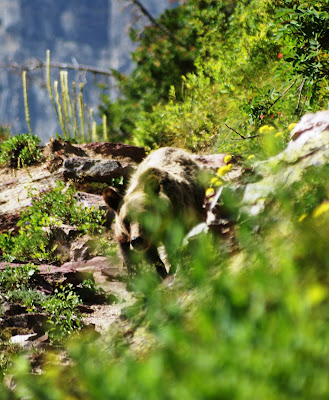 Here HE COMES, marching down the trail, since there were ONLY 3 OF US! 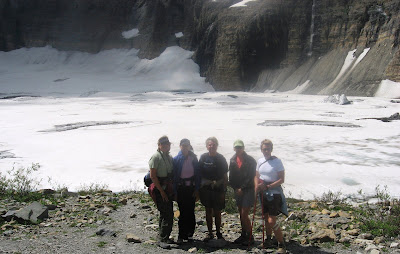 The view in front of Grinnell Glacier. 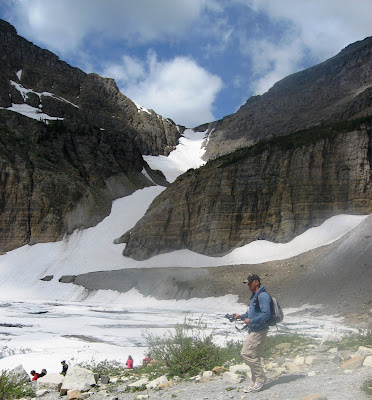 Another glacier shot. You could not do justice to the size of it with your camera. 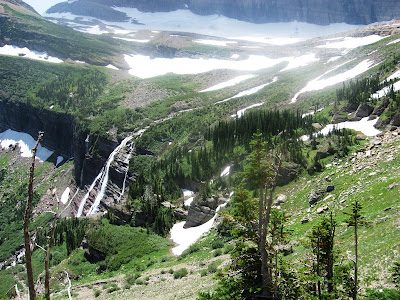 A shot from above Grinnell Falls. 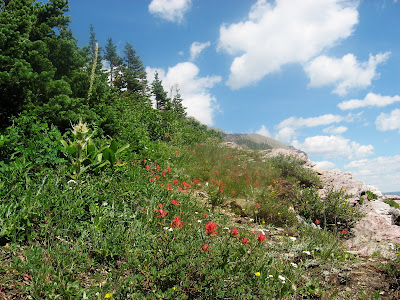 The reddish flowers are "Indian Paintbrush" that we also see around the Austin, TX area. 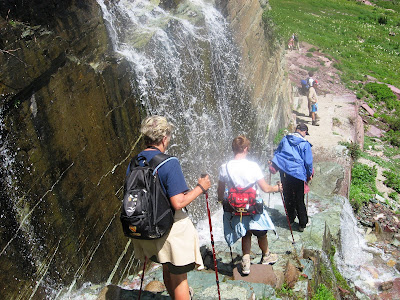 Here is the waterfall we had to hike through. No way to not get wet. 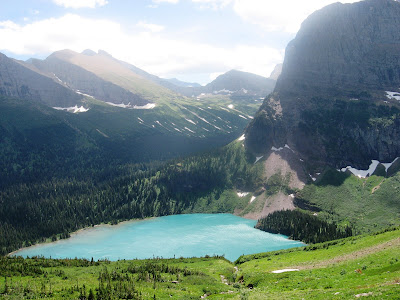 We are headed back down and once again the lake we have to cross by is in view. 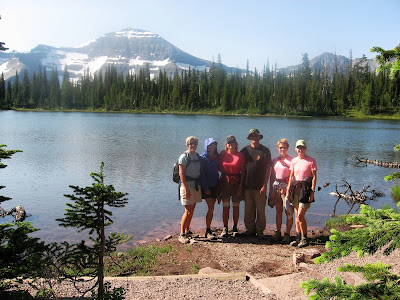 We made it down and another day hike is over. ONE MORE DAY OF FUN!

WHAT A BLESSING TO HAVE SEEN THE WONDERS OF GOD'S CREATION!
THANKFUL FOR WONDERFUL MEMORIES!

4 In his hand are the depths of the earth, and the mountain peaks belong to him.
5 The sea is his, for he made it, and his hands formed the dry land.
Psalms 95:4-5