While in Idaho, we took some time to visit a museum.  We are not usually ones to visit museums, but this particular museum is the small town of Wallace, Idaho's nod to historical cultural anthropology.  For you see The Oasis is a former bordello--NOT from the 19th century, but the 20th--closing its doors the final time in 1988.  Closing the doors might be an understatement--it was more like slamming the doors while vacating on the run.  For you see after a long and financially successful run, the feds were on to the whole scheme.  Madame Ginger had been able to run this illegal house with the help of the local constables--after all they were well paid behind closed doors so they would  close their eyes to the comings and goings through the doors of the town's rest stop.  After all is an oasis not a rest stop? 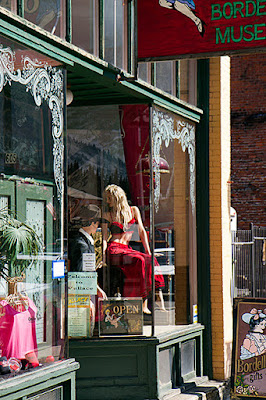 The girls fled in a hurry  only taking the clothes on their backs and a few personal items.  The Oasis was left just as if they would be opening up for another 16 hour day.  Clothing, bed linens, timers, price list, personal items, and beds--all exactly like they expected to return the next day.  The next day for The Oasis and the oldest known profession were over. 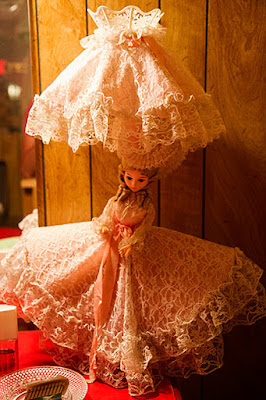 As we toured the "business" was explained to us.  The girls worked 16 hours shifts--7 days a week--no exceptions.  They were rotated every six months to keep fresh faces in the line up.  There was a chain of brothels through out the west--using girls as their merchandise--and creating an always changing rotation between cities.  The "girls" made over $100,000 a year and the madame in excess of $1,000,000 per year.  It was all very disturbing---very dark---causing me to weep deep in my heart for the loss of innocence--loss of integrity--all for money which you did not have time to spend. It was the same mourning I experienced in Amsterdam when we walked through the red light district.  The Word addresses women selling themselves---remember Rahab to begin with.  The thoughts which kept running through my head was why would any woman turn to prostitution?  Desperation has to be one of the top reasons.

Human Trafficking is a "hot topic" among The Faithful currently.  #1 Daughter is working with an organization and giving presentations to prevent children from falling into the trap so cunningly woven by those preying upon the vulnerable.  It is not always a choice--it is often a trap--and once the trap is sprung--GOTCHA!  Young girls--and boys are violated and used as human merchandise by the lowest of the low.

As I thought through this, I realized we all think--it could never happen to me--or mine.  I challenge you to consider if there is anything you would sell out for?  Is anything so important to you that you would compromise your very integrity for it?  Fame, fortune, success, power---anything?  Selling out does not always involve our bodies--instead it can be the very core of who we are.

The experience of touring this museum, though greatly disturbing, was also a huge wake up call to the potential for moral failure in us all.  ONLY with God's help and protection--only with the protection of those who love us and hold us accountable--only by sometimes walking down the right street and not making the wrong turn are we able to avoid the tragedy of becoming a victim.

Once again God has orchestrated a circumstance to remind me of my responsibility to those He places in my path.  He reminds me it could have been me.  He reminds me--He loves us ALL--even those caught in the web of man's depravity.  What can we do?  Pray--take a stand--be on the look out--and allow God to use you-if He will to take care of His sheep.  It is all so deeply disturbing to know this goes on all around us--we must not turn a blind eye.

Confess your faults one to another,
and pray one for another,that ye may be healed.
The effectual fervent prayer of a righteous man availeth much.
James 5:16
Posted by lulu at 4:00 AM