EATING DUST ALONG THE TRAIL

I returned very late Wednesday (almost Thursday) from a hiking trip to the Grand Tetons and Yellowstone National Park.  It was a glorious week with breath-taking hikes everyday, but one.  We have finally gotten old enough to beg our fearless hike planner for a rest day during the week. 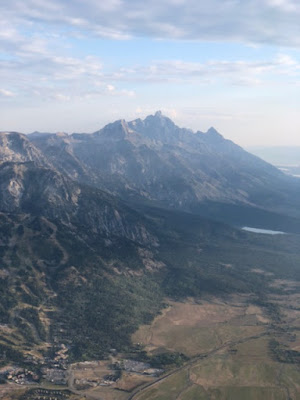 As our group of seven hikes the trails, we are only able to traverse single file due to the narrowness of the trail much of the time.  Constant vigilance is required to stay in an upright position due to the many stones, boulders, crevices, and roots along the trail. 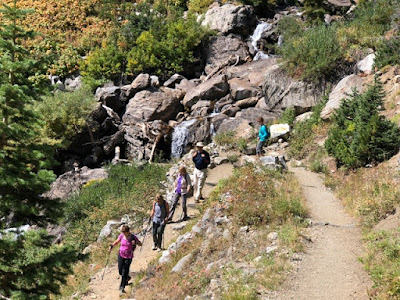 I seem to always be at the back of the pack for a variety of reasons.  Though I worked very hard to physically get ready for this trip, the others are in tip top shape from hours of activities every day--so perhaps I might be the "Weak Link".  I also have learned to be super cautious after my fall in the Grand Canyon--especially going down. 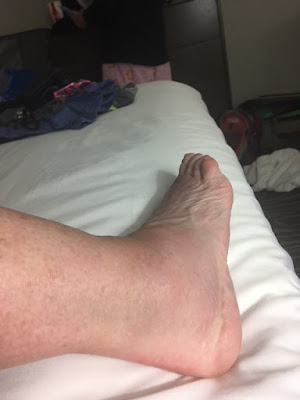 There we are climbing up and going down the mountain--day after day in a single file line.  There is something to be gained from being in the rear--wild animals live in the woods that do not like to be surprised when some strange creature rounds the bend of the mountain.  If I am at the back, I will be the last dish in the buffet line.  When you are following along, you also will not be blamed for any wrong turns on the trek.  Adding a mile or two to an already long trek does not make you "Most Popular".  Most of the decisions of when to take a break for a snack, drink, or most importantly a breath of air are made by the leader of the pack. This also can be a magnet for griping and complaining, when you do not time those all important breaks --just right.  NO--I do not wish to be the "Leader of the Pack." 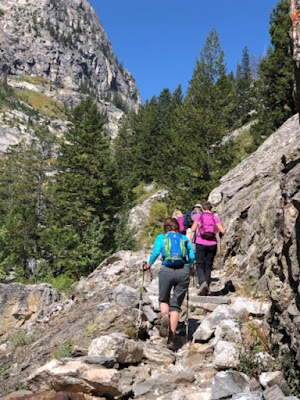 Instead I am perfectly happy to be "trailing along" the trail in the rear.  NOW that has its own set of problems.  The dust kicked up by those in front of you is constantly blowing your way.  Filthy at the end of the day is an understatement.  If you dare to start sight seeing or lagging due to shear exhaustion, you might find yourself FAR from the others.  Instead of being the last dish on the buffet line, you are now the first dish on the dessert table. The bears do not attack groups of four or more (WHO KNEW BEARS COULD COUNT!).  "Let's see, one - two - three - four---NOPE too many.."says Mr. Bear. "OH BUT WAIT---only one dish on the dessert table--all alone--PERFECT for my Sweet Tooth!"  Dead hiker down!

It is all part of hiking in the mountains, but it lead me down the trail to thinking about God's Chosen People wandering around in the wilderness for F O R T Y years!  I am Molly-grubbing after one day---who could possibly imagine that long.  AND can you comprehend the dust at the back of that multitude?  Speaking of griping and complaining--this bunch puts me in the shade!

The one place I kept going back to was the trust God's Chosen obviously had in the leader of the line.  Why else would you continue to follow Moses for forty years?  Knowing he had been in the presence of Almighty God, and survived, they ultimately trusted Moses to lead them to freedom.  They were disobedient, griped and complained, but at the end of the day--they chose to follow Moses around the wilderness for 40 years--because God had chosen him to be their leader to freedom.

That trust did not come easy, and it had a great cost, but still they kept putting one foot in front of the other--KNOWING the promises God had made to them.  What a testament to trust---What a declaration of faith---always continuing along the trail--always with hope for a future--always believing the promises God had made.  The shear willingness to follow along believing and trusting what God had said lead to their eventual entry into The Promised Land.  The reward was at the end of the trek and only came when they chose to trust the One Who Lead The Way---God Almighty!  The Promised Land was gained when they chose to trust God.  Are we trusting Him?  Has He not also promised us a Promised Land?  Believe--Trust--Have Faith--and the Promised Land is yours!

And you saw how the LORD your God cared for you all along the way as you traveled through the wilderness,
just as a father cares for his child.
Now he has brought you to this place.'
Deuteronomy 1:31
Posted by lulu at 4:00 AM