This past Sunday the high Reverend taught the passage in Luke where Jesus cast out the demon from a mute man.  We all seem to think demons are fictitious creatures directly from Hollywood.  Even if we give them lip service, we certainly do not think this is 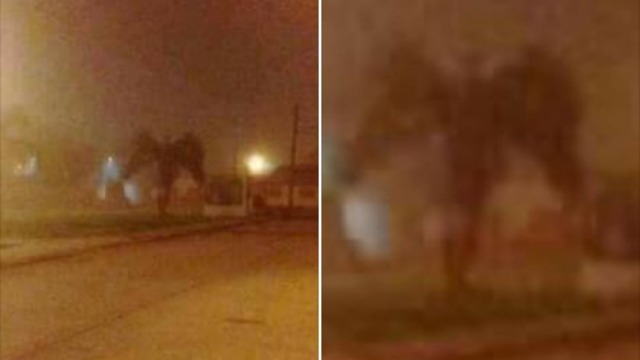 lurking around the corner.  This is a picture that went viral on Facebook.  If you notice the details, the figure is taller than a house.  When you read about "Fallen Angels" in The Word, you find that roughly a third of the Heavenly Host fell from Heaven with Lucifer the day of the great rebellion.  Heavenly Host are not mortal beings, but instead eternal creations of God with the strength and powers given to angels.  One third of the heavenly beings are called "Legion" in The Word.  SO--there are many forces of evil roaming this earth--looking for a victim!

ALSO--when we read of Jesus casting out demons, they are not described as having fang like teeth, scales for skin, horned, ugly beings.  In fact they are not described, the  ugly face of demons is a creation of man.  I suspect demons are disguised as beauty.  Only when the evil that fills them is revealed do we see the the truth of how ugly they are.

SO--where am I going?  My first awakening to the dark forces of Satan and his army of evil came when reading Frank Peretti's trilogy concerning spiritual warfare. 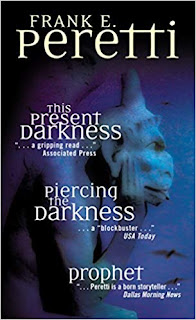 Until I read this book, it had not occurred to me what the faces of evil which lurk among us looked like.  Fear, jealousy, hatred, deceit, misery, depression, shame, and anything which convinces us there is no hope.  "Evil spirits are normally viewed as 'influences' and their effectiveness in the lives of people is undetected because they are not seen as real personalities that are totally and unreservedly evil.  The ambassadors of Satan are busy doing the thing they do best ~ deceiving men and women both unsaved and believer alike."

There you go, Old Lucifer is still up to his old tricks, but he is more cunning than ever.  What then is our defense against these evil beings set loose to roam to and fro throughout the earth.  GOD---Lucifer does not triumph-GOD DOES! Even Jesus acknowledges in The Word using the mighty power in God's finger in casting out the demons. HIS WORD is our high barrier to keep away Satan's evil attempts. The truth of His Holy Word and the promises He has made us are our hope for victory over the forces of evil.  PRAYER--acknowledging when we are being weakened by Satan's attacks and asking God for help.  HE IS OUR STRONG TOWER!  We are not facing his attempts to attack us alone--God is our refuge and strength.  He will NOT forsake us!  He will fight AND WIN the battle!

So, Satan may not be overtly attacking us with a pitchfork, but his subtle-beautiful enticements are all around us.  Beware and remember-BUT GOD!

But if I by the finger of God cast out demons,
then is the kingdom of God come upon you.
Luke 11:20