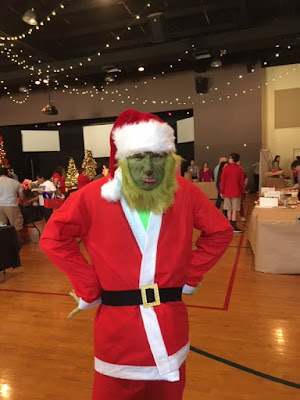 We ALL know this guy---Mr. Grinch.  His reputation proceeds him!  It would seem he HATES Christmas.  With a little digging we discover, it is not really Christmas he hates, but instead he has been deeply hurt by the rejection of those people who DO love Christmas--The Who's.  Poor Mr. Grinch was treated badly, laughed at, and spurned, because he was different.  Finally he flees the only home and family he has ever known and lives his life licking his wounds by lashing out at all those who hurt him so deeply.  If he is rejected by the Who's, then he will go them one better and reject them and all they love and hold dear.  Convinced he can win the "One Up" game, he decides to steal all their joy over Christmas and cast them into the gloom of his daily life.  Alone in his cave, he even mistreats his poor dog in an effort to drive away the only living being still by his side.  His life is so deeply filled with hurt and distrust, he is convinced he is better off completely alone.  Hard hearted, after experiencing such great pain, he seems to be a grump of the highest order--even making Scourge look like a saint.  Is he a grump or is there more to his story? 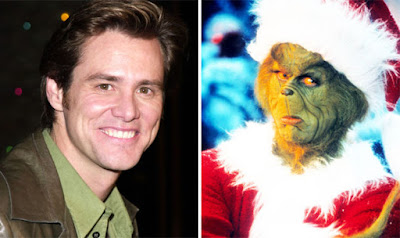 I know a little secret, the Grinch is living behind the mask of make up and is not who he seems at all.  He has chosen to put on the make up and live the part of The Grinch.  It is all an act and not the truth of the man behind the make up.  The Grinch has a heart---a heart he has chosen to protect from the pain the world can inflict.  He does love--and desires to be loved, but is fearful of more pain if he dares to expose himself.  Jim Carrey and my friend above are both playing the part of a character who teaches us a great lesson.  Many of us hide behind make up and masks trying to play a character who is not the real us.  For fear of rejection, we dare not show the world the real us--so we think.  My friend above was alternately rejected and loved as he strolled through the crowd this weekend.  He needed a body guard (his faithful wife) to protect him from  being either kicked in the shins or strangled in a hug.  Mr. Grinch might want to scare away the masses, but instead he either provoked attack or was loved to pieces depending upon the child. 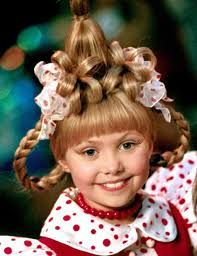 So when we meet grumps and bullies, we have the same choice.  We can either attack them or refuse to acknowledge them at all or we can love them in spite of how they behave.  Do we stop to consider the WHY? of the behavior of the grumps in our life?  Have they been rejected, hurt, or in some fashion cut to the quick?  What makes one grown into the one we run from and avoid at all costs?  What difference could it make if their lashing out was met with kindness?  Could we all reach deep down and behave as Cindy Lou Who?  Could we look beyond the mask--the make up and see the heart in need of melting?  Could we love the Grinch--even when he did not deserve our love?   Could we love the Grinch as Jesus loves us--in spite of who we are--in spite of not deserving it?  Do we understand the impact of a kind word or act?  Are we willing to love others, as Jesus has loved us, when we least deserve it?