MY OPINION -FOR WHAT IT IS WORTH

NOT a huge fan of the news, I can only endure short bursts before I am clicking the remote.  I have noticed there seems to be a new trend today of uncovering every foolish thing people in the spotlight have ever done.  There is no grace for the indiscretions and stupidity of youth.  Assault is one thing, but stupidity is completely different. The latest one I noticed is for inappropriate choices in the late 1960's.  In case you are not a math person, that would be 50 years ago.  NOW, I am NOT excusing bad behavior, but I am wondering how many of us could survive the revelation of every bad choice we ever made?  I can assure you I do not want to dredge up some of my personal choices from my mid to late teens.

No credit is given for the following decades of good.  The one choice in your late teens, in a totally different culture, is not to be excused.  We are trying and convicting and demanding punishment by banishment from public eye without a blink of an eye.  No thought is given to how we might have acted during our "stupid years".  We all just want just punishment for the guilty. 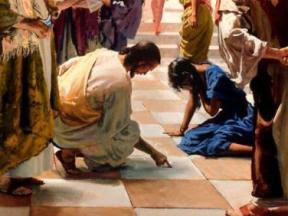 I seem to remember a great story in The Word, from the eighth chapter of John, about a young woman who was brought before Jesus.  Her accusers were demanding punishment for her sin.  As he stirred the dirt, he requested the one who had not sinned to begin her punishment.  The posse of righteous citizens slowly walked away.  When she was asked where her accusers were, she told Jesus they had all gone away.  He then told her to also leave and sin no more.

SO, I am saying to you, until the accusers are willing to stand under the microscope of righteous examination, I am not listening to all of this.  It is another political game bent on destroying.  What happened to grace?  Is there any willingness to hear the other side of the story?  Are we all to be held accountable for every bad choice and mistake we have ever made.  Are we willing to extend the same forgiveness that has been lavished upon us?

As I thought all of this over, I was reminded that God has forgiven and forgotten my bad choices.  I am so certain of this that those bad decisions do not even come to mind.  The sins of my youth have been removed as far as the west is from the east.  Grace was extended and the slate wiped clean when I called to Jesus.  Why then should they be a topic of conversation over fifty years later?

This is NOT up for discussion.  I am expressing my opinion for what it is worth and I refuse to get into a political debate.   I am asking for you to take the politics out of it and consider if this was your father, your grandfather who was standing accused.  What judgement should he receive?

For if you forgive others for their transgressions,
your heavenly Father will also forgive you.
Matthew 6:14
Posted by lulu at 4:00 AM