COME ON OVER RED ROVER

I have wonderful memories of hours spent on the playground as a child.  "Red Rover" was definitely a favorite among my fellow rebel rousers.  We had smart and multi-tasking teachers who incorporated physical education with recess to run off all that pent up energy. 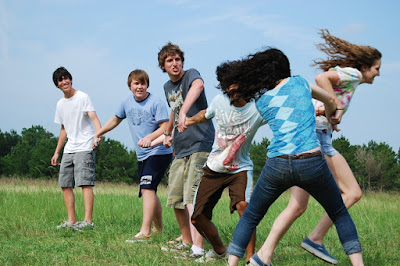 Following the dreaded picking of teams (Lord, PLEASE don't let me be chosen last), the teams stood facing each other at the teacher's designated distance.  The trick was in the lining up~ for two weak players (that would be me) side by side was asking for disaster.  The players were slowly called over by chanting the little phrase, "Red Rover, Red Rover, Send Name The Child Over".  The called player would then run full steam ahead and try to break the line.  If they managed to break through, then they could take the player of their choice back to their line.  If they did not break through, they joined the other team.  The object of the game was to end up with all the players.  Certainly there was strength in numbers, but the strategy of lining up was critical.  The runner could try to break the line anywhere they chose, without prior notice.  It was imperative the entire line have their feet firmly planted and be ready.  One quickly learned the closer you stood together, the better the grip and less likely the runner could break the line.  As I thought this over, I wonder why we did not link elbows?  Probably against the rules.  I do distinctly remember a day when the runner hit our firmly linked hands with such force our heads bumped when we were thrown together.  Big knots, but NO BREAK!

We are spending two weeks talking over the shoes of peace in small group.  You put those shoes on to give you the sure footing which comes with the truth and the sure knowledge of the peace God intends us to live in.  As we stand shoulder to shoulder with our feet firmly planted, we present a strong front which the enemy will not be able to penetrate.  I have such a clear picture of standing with linked elbows--close--and our feet hip width apart-firmly planted.  That is the beautiful image of our community of believers and exactly why God desires for us to live in relationships and in community.  We have each others' backs though thick and thin!

This only works when we are united in peace, and peace seems to be endangered these days.  There is so much discord, dissension, and chaos in the world it would take a spider web graph to decide all of those we are not at peace with.  There is strife in families, disagreements among friends, war among believers, and out an out animosity between political parties.  Peace has become a rare commodity.  The enemy LOVES us to be in chaos ~ distracted from that which is eternally important.  We are ineffective warriors whose lines are easily broken and victims dragged off when we are living in turmoil.  Put on those shoes, choose peace, stand firm, and become an effective warrior for The Gospel of Peace.


I leave you with these poignant notes from Wesley~

Ephesians 6:15 And your feet shod with the preparation of the gospel - Let this be always ready to direct and confirm you in every step. This part of the armour, for the feet, is needful, considering what a journey we have to go; what a race to run. Our feet must be so shod, that our footsteps slip not. To order our life and conversation aright, we are prepared by the gospel blessing, the peace and love of God ruling in the heart, Col 3:14,15. By this only can we tread the rough ways, surmount our difficulties, and hold out to the end.
Posted by lulu at 4:00 AM