I had a good friend and faithful reader ask me yesterday for a parable.  It rang something along the line of~ enough deep theology--give me a parable.  Be careful what you ask for--here is my feeble attempt~ 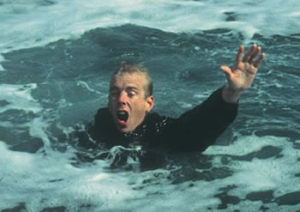 There was a man (in Biblical times it was always a man) who was aboard a cruise ship.  A few days after leaving port, there was nothing to be seen but miles upon miles of ocean in every direction. The sailing was smooth and the ocean sparkled with the reflection of the sun on the rolling waves.  The blue sky quickly and unexpectedly turned dark gray and a sudden storm filled the skies.  As the ship began to roll with the waves of trouble, suddenly the man was swept overboard into the angry sea. The deep water was of concern enough, but the ocean was also filled with sharks and other dangerous creatures from the dark underbelly lurking under the surface.  Thankfully his friends on the deck all saw what happened and began to discuss how they could save him.

As the man bobbed over wave upon wave, they began to throw life rings his way.  Ring after ring was tossed in the vast ocean.  The man would see a ring and swim over and grasp it for dear life.  Slowly the ring would began to deflate.  Before you knew it, the man would once again be in the boiling ocean with nothing to help him.  Another ring of a different color would appear and he would swim over the next wave with the hope this would be his life saver. Once again the ring would deflate and he would be left to struggle.  Wave after wave would reveal another ring tossed by his well meaning friends, but all of them were fatally flawed and would not continue to hold the air necessary to save his life.  At best, they kept his head above water for only a brief period of time.

Suddenly a large wave swept the man higher than ever and he made an amazing discovery.  A few feet away was a man in a life boat--an easy swim away.  The man had been so busy grasping at the temporary fixes close by, that he did not realize safety and the man in the life boat were right by him the entire time.  In his panic and short sight, the man had missed seeing the permanent way out of the dangers of the sea while lunging toward the flawed rings.

The territory along the path we trek while passing through this world is often filled with life threatening dangers and temporary snares.  While traveling along, man will throw you all kinds of "must haves and life savers" in an effort to help you have a happy and fulfilled life.  He will try to save you from the storms with temporary and leaky fixes.  Meanwhile, the true life saver and boat are only a few short strokes away.  It only takes looking beyond the quick and temporary fixes to discover the short route to a saved life.  The life boat and its rower are all well within reach and waiting for you to turn their way and put your hand out for rescue. You must look beyond that directly in front of you and examine all around.  The rescuer is just beyond the temporary fix and ready to haul you into the boat.

He reached down from on high and took hold of me; he drew me out of deep waters.
Psalm 18:16