SEARCHING FOR THE TRAIL HEAD

Almost all of the hikes we have been on have clearly marked trails and trail heads which are easily found and followed.  This did not prove to be the case in California.  We spent a great deal of time looking for the beginning of the trail.  We spent as much time in Yosemite wandering around searching as we did hiking the actual trail.  A park ranger explained the loop trail we were hiking had several points of entry that caused the confusion.  I will give him the benefit of the doubt, but in all the parks we have hiked in, this has never been the case.

In Yosemite, once we found the trail, we were able to stay on it.  There was a stretch of a shower from the fall spray and the stream we had to cross in the beginning of the trail.  This necessitated wringing out of wet socks before continuing~a minor inconvenience. 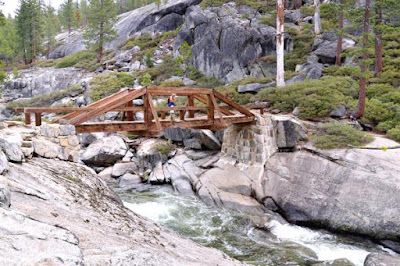 And then there was the elusive bridge.  Our fellow hikers kept telling us we would have to turn around on the long bridge, because the trail became impassable.  Could I just tell you how many bridges we crossed?  FINALLY we got to the turn around point.

Well worth the effort once we finally arrived at the correct destination.  The original hike was to have been all the way around the Loop Trail.  The snow melt and flooded trails made this impossible. 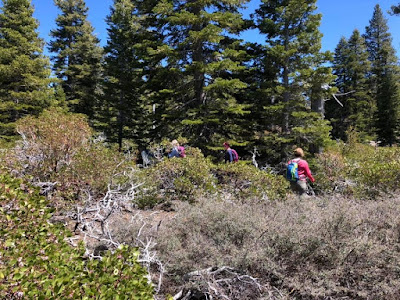 Lake Tahoe proved to also have trail challenges.  Same song-different verse.  The trail quickly went underwater and we decided to wander through the woods in search of a place to hop back on the trail.  This was a stroll through the brier patch.  One of the hikers came back with a terrific case of poison ivy-could this be where she was exposed?  We were in the midst of dense foliage and identifying poison ivy in the thick maze of greenery was impossible.  I ended up completely turned around--thank goodness for the trail boss who kept her sense of direction.

We were told to stay on the trail, but it was difficult finding the trail at times and impossible to stay on it at others.  The sign above warned us it was dangerous to stray from the trail.  There were times we had no choice but to stray and hope to find our way again.

So it goes with life, we are forced off the trail at times.  The trail head becomes lost in the confusion of the world.  We become sojourners who loose our way and our sense of direction becomes turned from God's plan to the World's Way.  Just as we experienced on our trip, all is never lost.  Eventually you will discover your way and get back on the trail~if you keep searching.  Keep looking for the signs and markers--our Guide is always close by.

“Set up road markers for yourself;
make yourself guideposts;
consider well the highway,
the road by which you went.
Jeremiah 31:21
Posted by lulu at 4:00 AM