We visited the Mississippi River headwaters during our trip. 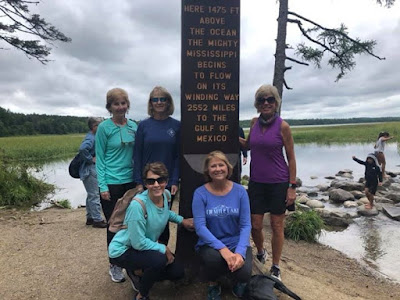 This mighty river which dissects our great country almost right down the middle starts from a very non-assuming lake here in Michigan.  Lake Itasca overflows into a narrow stream which eventually forms this great river. 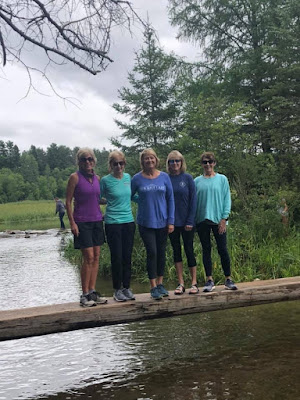 Who could believe as we stand on the log over the headwaters of the Mississippi, it is difficult to imagine it eventually will become this~ 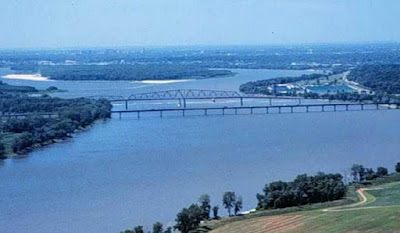 Water from parts or all of 31 states drains into the Mississippi River, and creates a
drainage basin over 1,245,000 square miles in size. Before reaching the Gulf, the
Mississippi meets up with its distributary, the Atchafalaya River.

The very idea a small trickle of water over rounded river stones could eventually pour tons of water into the Gulf of Mexico is preposterous.  You must remember what eventually meanders south and empties into the Gulf is not the overflow from this small lake.  As the information states, countless rivers, streams, and tributaries flow toward the river to make up this great body of water.  Songs and books have been written over the ages, battles have been fought, and great cities have sprung from the life provided by these waters.  What starts as an quiet trickle grows into a mighty force with time, and joining of forces.

As we gazed upon this marvelous wonder, I was reminded of the story our hostess told us one night over dinner.  There was a missionary, Peter Huang, who kept being nudged by God to go to Mongolia from Korea.  He really did not want to go and kept going back to God asking to be released from God's urgings.  Eventually he was obedient (we all know you can end up somewhere like a whale's belly if you refuse God).  His step of obedience lead to a great river of living water.  God knew these people were hungry and ready to know the truth when he sent Huang. He found four people who accepted God's grace.  From these four people eventually came over 100,000 people, whose acceptance of Christ as their Savior can be traced back to Huang's obedience.  One man's small step of obedience lead to this mighty nation of God's people.  It all starts with the first conversion, the first trickle, and eventually with the joining of forces and multiplication of the masses continuing to spread The Message.  What starts with a small trickle can become a mighty river of living water, and it all begins with the water pouring over the rocks to feed the first stream.  What a Mighty God we serve!

19 Therefore go and make disciples of all nations,
baptizing them in the name of the Father and of the Son and of the Holy Spirit,
20 and teaching them to obey everything I have commanded you.
And surely I am with you always, to the very end of the age.”
Matthew 28:19-20