A GIFT IS A GIFT

Last week I gave a short devotional to the sweet ladies at The Well. 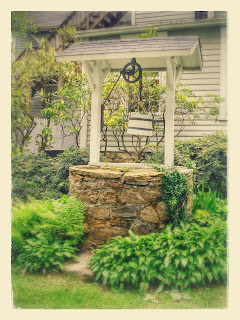 It began with a reading of O Henry's classic short story, The Gift of the Magi.  In case you slept through English class during those school years, I will remind you of the story.  The scene takes place in England, and the characters are a young couple who are struggling to make ends meet during difficult times (this seems to be a re-occurring theme throughout history).  In spite of the struggle, they felt so fortunate to have two priceless items in their possession.  The wife had a beautiful head of hair that fell splendidly below her knees.  Most of us women understand the value of a "good" head of hair.  The man owned his great-grandfather's beautiful gold watch.  It was so splendid he consciously avoided pulling it out in a showing manner.  After all how odd that one so poor should own such a splendid watch.  To hasten along to the point, they both sold their prized possessions to buy their loved one a gift.  She bought a fine gold chain to replace the worn leather strap which held his heirloom watch.  He bought bejeweled beautiful combs for her fine hair.  Neither of them could use their gifts, but the story is about the meaning behind gift giving not the gift itself. 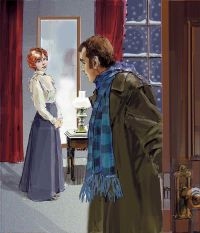 In my mind, you become an adult when you finally are more concerned with selecting gifts for others than the gifts you desire to receive.  I have a strong philosophy on gifts.  A gift is a gift--it is often tied up with strings, but it has no strings attached.  Once I present the gift, I also relinquish control of how the gift is used or not.

NOW~we are headed to the point of the devotional.  The tradition of gift giving at Christmas was begun by The Magi--wise men for you who are unfamiliar with the "King James" translation.  We all know the gifts were very valuable.  We all know the lengths the Wise Men endured to deliver the gifts.  What we don't know---it is NOT addressed in The Word -is what did Mary and Joseph do with the gifts?  Did they dash to the nearest pawn shop and cash in -I am pretty sure they could have used the funds--after all they just traveled many miles on a donkey, resorted to staying in a smelly stable, and to top it all off had another mouth to feed.  Did they put it in a closet and hide it away for a "rainy day"?  Did they put them in a college fund for the baby's future education?  What did they do with the wonderful gifts.  It is never addressed in The Word.  What does this tell us?  In my mind, the giving of the gift and the reason behind it was more important than what became of the gift.  Mary and Joseph could do whatever they wished with these magnificent gifts.  All we need to understand is why the gifts were given and the true value of the invaluable. 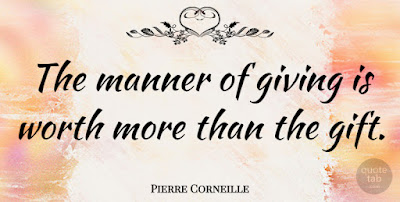 We have evolved Christmas into a gift giving frenzy.  Not unlike children, we are consumed with the buying of gifts which in most cases will be a temporary high headed for a place on the shelf of the forgotten.  Gifts are given as an expression of love and esteem.  Personally I prefer little gifts such a pictures of the grands, or even better an experience or adventure-time spent together.  It really is not about WHAT you are giving, but your attitude when giving.

The greatest Christmas gift was the reason for the season--the gift of the Christ child.  God on Earth.  The Father's Lamb.  Our Get Out of Jail Free card.  What greater gift was ever given?

I invite you to not become embroiled in frantic gift searches; to put aside any guilt over gift disappointment; and instead remember why you are giving the gift.  Be one with "The Little Drummer Boy", give your best--and give it while being mindful of the purpose of the gift~ a reminder of your love.

the star which they had seen in the East went before them, till it came and stood over where the young Child was. 10 When they saw the star, they rejoiced with exceedingly great joy. 11 And when they had come into the house, they saw the young Child with Mary His mother, and fell down and worshiped Him. And when they had opened their treasures, they presented gifts to Him: gold, frankincense, and myrrh.

12 Then, being divinely warned in a dream that they should not return to Herod, they departed for their own country another way.