The final big winter storm brought record breaking cold to our part of Louisiana.     What began as a short sleet storm slowly turned into a beautiful snowfall.  The beauty and the quiet as those flakes softly floated toward the ground lured me into a trance of sensory overload.  The magic of winter had cast its spell of delight upon me. 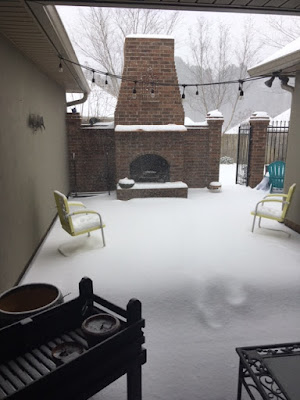 The next day brought a beautiful walk around the neighborhood.  The mounds of snow were dry and soft.  This type of snow is not for building snowmen or throwing snowballs, but instead a feast for the eyes.

The temperatures kept falling and the bitter cold began to creep in. Promises were made for a week of below freezing weather.  The first morning after the bitter freeze began, the top layer of the beautiful snow had become covered with a layer of ice.  It was still beautiful---and the walks were still a delight, but there was a hint of danger to come in the air.  Each morning for the remainder of the week, the ice grew thicker and the walks more treacherous.  My walks turned into baby steps of caution around the block for fear of falling. Cars remained parked in garages as streets became ice rinks.  We became quarantined for a different reason; it was too dangerous to drive. The beautiful white which carpeted the ground was filled with the threat of danger if we dared to step outside.

Slowly the ice melted and the world returned to normal.  The worst part of the entire week was yet to be revealed.  As the ice began to melt, it became evident the damage that had been done to all of the trees and plants.  The trees had already formed new buds which now began to wilt and fall away.  Plants which were well established with buds set for the new year were turning brown.  All of the gardeners began to hold their collective breaths in dread of what might be lost.

Examining the plants in my yard, I began to notice something rather remarkable.  The leaves were brown and beginning to fall off, the trees lost all their leaf buds, and the hope of Spring seemed lost with the death left by the beautiful winter storm.  As I looked closely though, I noticed the plants were still alive; their limbs were still green.  With the warmth of the sun, the trees began to bud again, and miracle of all miracles, the azalea buds survived and bloomed.  What appeared to be dead and lost was brought back to life by the warmth of the sun.

There is a lesson in here for us.  The world can be deceptively beautiful and draw us unaware into the path of that which may lead to death.  But as long as we have breath in our bodies, it is never too late to be reborn---brought back from the brink of death to the beauty of the full and abundant life.  All it takes is the Son.

The thief comes only to  steal, kill and destroy.

I come that they may have life and have it abundantly.