YOU HAVE TO LOVE A PARADE

We ALL love a parade---or do we?  Personally I love a parade--from a distance.  My late father in law often reminded us "I have the best seat in the house while watching football."  That seat was his recliner, where he might nod off for a short nap if the game was not exciting, and all the comforts of home were at his hand. I might be guilty of enjoying parades, like Pappaw, from a distance. 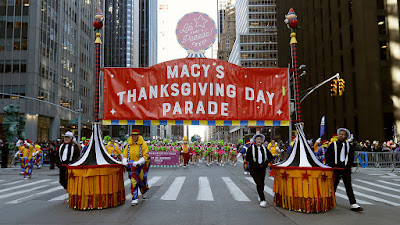 We all enjoy the holiday parades; unless you are in the kitchen preparing the feast.

Personally, I am not a fan of large crowds and have a slight case of claustrophobia when in a crush of hordes of people. 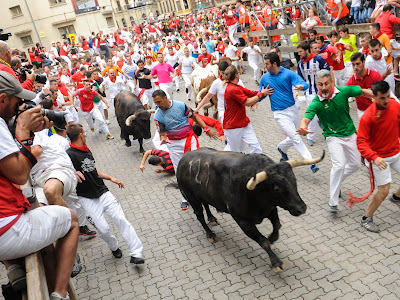 WHO in their right mind would want to be in this parade?  Look at bull #2 who is bearing down on the fellow on the ground.  I do not get it! 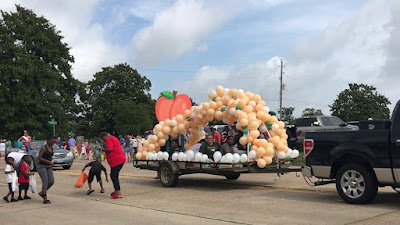 Most parades are celebrations of some sort.  We have the annual Peach Festival parade here in my home town.  I believe we are celebrating the Peach crop--or some years--the lack thereof.  Then there are homecoming parades, Veterans Day parades, and this famous parade celebrating the end of World War II among many others. 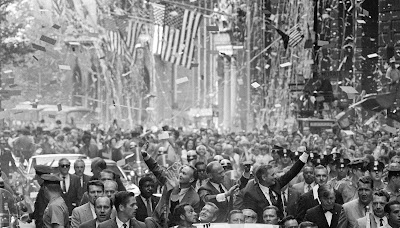 The body of the parade may be filled with bands, floats, open air cars carrying dignitaries or beauties, marching soldiers, clowns and their cars, giant balloons,  motorcycles, the horses at the end and on and on.  One thing which every parade shares in common is the crowd.  There are always those who are standing on the edge of the roadway--the parade route- to watch the parade go by-the spectators.  They are participating in the celebration of the occasion by being parade watchers

This week is our annual reminder of the last triumphant parade the Earthly Jesus participated in.  As it turns out, He was the Grand Marshall, the Celebrated, the One they were all pushing to see.  As He draws near, the crowds part and palm branches and the clothing of the people are placed in His path, as the lowly donkey brings the promised Messiah triumphantly into town.  The parade leading to His final days.  He knew--He knew where all this was headed, but He still proceeded down the parade route--He marched forward to His date upon The Cross.

Holy Week began yesterday.  Are you going to casually watch from the safety of your couch, or are you going to participate in the remembrance of what this week brought?  It is always good to pause, reflect, and remember exactly what this week means to us.  What was accomplished, once and for all, at the end of this week.  I am praying we can all be participants--not merely by-standers but active participants as we pause and remember.

"Many in the crowd spread their garments on the road ahead of Him,

and others spread leafy branches they had cut in the fields.

Jesus was in the center of the procession,

and the people all around Him were shouting,