We cannot possibly understand the depth of what Easter holds, unless we look closely at the depth of Jesus' suffering.  Holy Week is over and my one question to you is, "Did you stop and ponder the great suffering Jesus endured so that we may live with Him in eternity? "  The depth of the love of the Triune God could not be more clearly demonstrated than the events of that week.  Jesus was the ultimate sacrifice to cover the sins of all mankind. 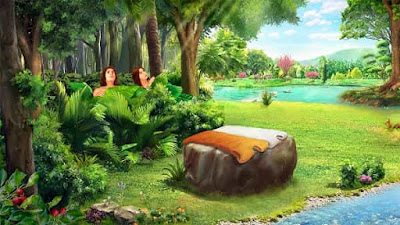 Sacrifices began immediately following man's fall in the garden.  The high reverend reminded us a couple of weeks ago of the first animal sacrifice.  God Himself provided that first sacrifice to cover the shame of Adam and Eve.  He sacrificed animals from His creation to provide clothing of the worldly man.

"The Lord God made clothing from animal skins

for Adam and his wife."

Truthfully I had never thought about God making the sacrifice to provide clothing for the now awakened Adam and Eve.  I knew there was no shame before they ate from the tree, but had not given much thought to God providing them clothing.  Is not this is a clear indication of God's great love and compassion for us.  He did not strike them down, but He did banish them from the Garden of Eden into the fallen world.

God certainly could have created clothing for mankind by thinking it into existence.  We saw evidence of His ability to do this during the week of creation.  God, our Good and Loving Father, provided clothing through His Fatherly love for His children by His own efforts.  God often uses "Fierce mercy to turn our hearts back to Him." Brother Chris.  What man deserved was what God had declared would happen if man ate that apple.  God, our strong and grace filled God, chose to allow man to live, but not without suffering the consequences of His actions.

The first evidence of how much God loves us, in my mind, is not the beautiful creation we were so graciously provided.  The first evidence was God's grace demonstrated by this sacrificial provision before ushering man into the wilderness of the fallen world.  God is our faithful provider.