Asses do not get whipped here in the South---they get whupped!  This fellow popped into my head today- 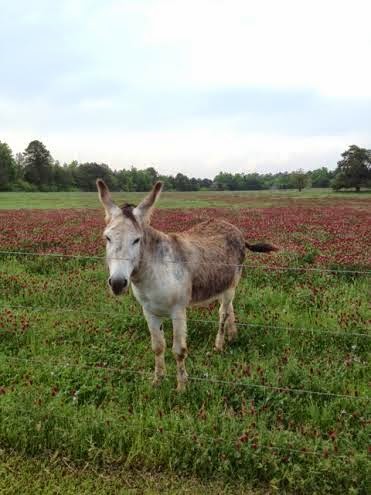 IF I were riding a donkey (in a effort to be nice I will refer to the ass as a donkey), that I had ridden for YEARS without problem and he refused to move on the latest trip---would I take it as a sign that God wanted me to stay?  Probably not---NOW I am not an abuser of animals--so there would be no whupping of the ass (WHOOPS, SORRY!), BUT I would be trying to figure out what the problem was.  IF said, donkey after three beatings, began to speak to me--NOT in donkey talk, but with words---would I have a conversation with him?  Would I not consider it a tad bit unusual that a donkey was questioning my treatment of him?  Would it NOT occur to me that speech coming from a donkey's mouth was some kind of miracle?  OH NO--- it would take the sudden appearance of an angel with a sword to get my attention.  A donkey talking would not do the trick!

So it is, Friends---God is showing us--God is directing us---and still we go on our merry way down the primrose path away from His will.  So bent upon what we think will make us happy, we refuse to acknowledge the signs and even the road blocks thrown in our path---we just keep on trucking-looking past those signs and walking around the barricades--headed exactly where we do not need to be.  We are a bunch of dumb ----WHOOPS!

God is reminding me---look around ---read His Word---listen for His directions---stay on the path---the things of this world are fleeting--He is eternal---
When your donkey is in the ditch---look for the cause and ask for direction--before whupping the ---!

God's angel said to him, "Why have you beaten your poor donkey these three times? I have come to block your way because you're getting way ahead of yourself.  The donkey saw me and turned away these three times. If she hadn't, I would have killed you by this time, but not the donkey. I would have let her off."
Numbers 22:32-33