THE TWANG ABOUT IT! 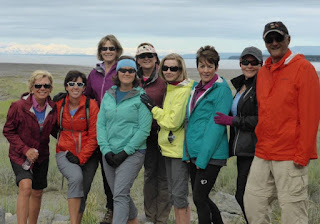 One of our days while in Anchorage was reserved for a biking trip down the Coastal Trail around the Cook Inlet.  Words cannot express my reluctance to hop on a bike for a twenty mile trek when my rear has not been on my bike in two years.  I had taken some spinning classes, but not since before Christmas.  To say I had a tender rear is an understatement.

The day began with getting lost--or unable to find the trail head when we were told to go the wrong way---translation difficulties? or the other left statement?  We NO sooner got on the trail than we had to stop for a picture at a scenic outlook above.  Unfortunately the scenery is way off in the background.  Behind us are mud flats--which are extremely dangerous if you dare to try to traverse them. 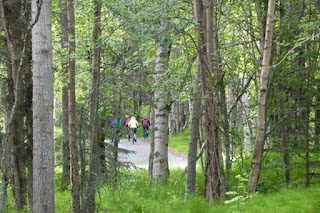 Here is living proof I did bike part of the trail.  One of the bikes had already experienced mechanical difficulties, when I managed to almost tear my derailer off.  SO we call the rental owner, who also happens to be in the hospital following surgery.  He first sends someone to replace the other bike and then comes himself--directly from the hospital to replace mine.  By the time he makes the exchange--the others are headed back.  They made the discovery the coast is only visible the first 6 miles of the trail and turned back.  So I am headed back and enjoying a slow ride thinking they will catch up with me. 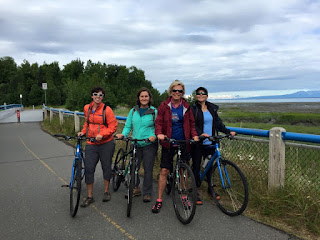 Turns out they encountered a mother moose and her calf.  Of all the things we had been warned about repeatedly--fooling around wth a mother moose when her baby was near was at the top of the list.  MORE dangerous than a bear! 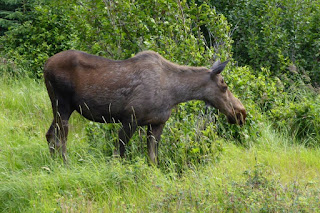 After hiking with this bunch for all these years, I was not surprised to hear they stopped and got a picture.  The only shocker was Sonja did not yell get my picture with both of them in it!  They reported the baby was injured and the mother was grazing nearby. 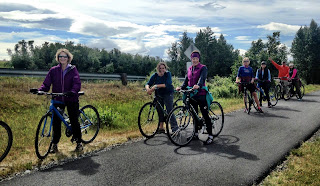 After "Moose Gawking", the crew headed back and we headed to Seaward---after EATING --of course!

When Pablo (the bike shop owner) came to give me a new bike, we had a conversation.  My normal---stream of chatting--getting your social history and medical prognosis. (By the way-he was not driving, but riding with the friend who picked him up at the hospital)   He looked at me as I prepared to bike off and said- "Your accent is very sexy."  KNOCK ME OVER WITH A FEATHER!  NOW he WAS under the influence of pain killing drugs--but there is a story behind why I was so floored.  Some have been critical in the past about the "twang" in my voice.  Oh, if I really am conscious of it, I can sound as neutral toned as the smoothest of announcers.  I do not think about it much at all---and it has been painful to have others point out their perception of a flaw.  And then God redeems that criticism---and allows me to see not all consider it a flaw.  Why some even like it.

A reminder--I am who God made me to be---and that is not bad.  He loves me exactly as I am--twang and all.

So we have come to know and to believe the love that God has for us. God is love, and whoever abides in love abides in God, and God abides in him.
I John 4:16