NO JUSTICE IN FORT WORTH

A child was attending soccer practice on a school  field behind a cyclone fence here in Fort Worth last week.  Suddenly a car ran through a four way stop sign, careened through the fence, and ran over the child and knocked his brother into the fence.  The driver of the car jumped out and fled on foot as twenty soccer parents watched.  The immediate concern was for the injured child--of course.  He was transported to the hospital by ambulance where he stayed a few days recovering from numerous injuries including a broken pelvis.  He will be in a wheel chair until his pelvis bone is healed. 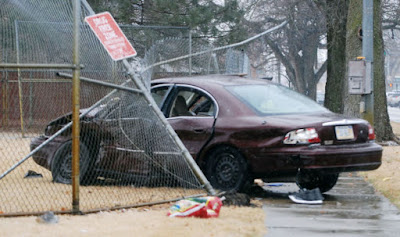 Meanwhile the driver was apprehended and held by by-standers and arrested.  Held overnight, the driver was released with no charges the next day--supposedly there was no evidence of them fleeing or injury to the child.  REALLY?  The parents have forgiven the driver--but they would like to see justice.  There seems to be no justice here in Fort Worth after the police obviously dropped the ball on this one.

A troubling story which brings to mind the niggling topic of forgiveness and justice.  Our human response when we have been hurt or harmed is for justice for the perpetrator.  We tell ourselves we have forgiven, but if we still demand justice have we?  It is quite simple to utter the words, "I have forgiven", but as Jimmy Carter once so poignantly reminded us if the cry for justice is still in our heart--have we forgiven?

I only know this child second hand--but my immediate cry was "Go to the top, do not let this go unnoticed."  There is no justice in this.  If the driver were charged, the family would be eligible for victim services, but since the police have failed to do the right thing--the family must pay for all the costs.  Is that fair?  Absolutely not.  Justice has not been served in this story.  How difficult would it be to forgive when you have not only seen your child injured and a long recovery ahead, but also must bear the cost?  It would take a super human effort to forgive when there is no justice to be seen.

How many of us have similar stories--oh, certainly no physical injury to the point of this child's--but pain and suffering can be just as great in the intangible form.  We all have more than likely suffered at the hands of another in some form or fashion in our lives.  The act of forgiving, especially when there is no sign of remorse is a steep hill to climb--and add to that no signs of justice and it becomes the Mount Everist of obedience.

I walked away from this topic with one huge take-away---there was NO justice in Jesus dying for my sins.  And yet---He forgave me.  With no call for justice--no demand for repayment of the unfairness---He willingly died for me.  He did not yell down from the cross---"This is not fair"  Rather he suffered and died so that I might live through His forgiveness.

How then will I be able to forgive when there is no justice?  By His example and with His help.  It is a step in obedience which will become easier with surrender of our will.  We are charged with the forgiving--as Jesus forgave us---our Just and Righteous God is in charge of justice.

5 The LORD loves righteousness and justice; the earth is full of his unfailing love.
Psalm 33:5
Posted by lulu at 9:22 AM