A SEASON OF THANKS 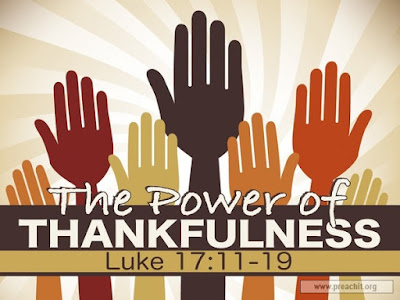 Halloween is behind us and the Holiday Season has officially begun.  For the next three plus weeks, I will post a Thanksgiving devotion Monday through Friday.  Saturday will see The Hood catch up and Sunday one of my favorite songs.  As I prepare my heart for the national day of thanks, I pray my musing will touch a note of thanksgiving in your heart as well.

As we leave the silliness and darkness of Halloween behind, we come to the celebration of All Saints Day.  The day when we commemorate those saints who have gone on before us.  The Protestant leaning toward the definition of a saint according to the dictionary is

a person acknowledged as holy or virtuous and typically regarded as being in heaven after death.

Though none of us come close to the perfection of the holiness of Jesus, we have all known one we could name as holy--virtuous--one who somehow marked our lives with their living example of faith. Those witnesses here on earth who gave us a benchmark to seek--showed us the path--marked the way--to the calling of seeking righteousness.  As we all mull over who has played the role of saint in our life, each of us would come up with someone different.  Many would name a parent--a grandparent--a pastor--a church school teacher--a youth leader--a trusted friend---people from close venues in our lives.  Others would name well known leaders in the denominations-the Pope, Mother Theresa, a Bishop, Billy Graham---great men and women of God.

I stop and remember the little old ladies who faithfully attended services, cooked casseroles, babysat in the nursery, sat with the ill, mourned beside their friends.  Those who ushered at church week after week, sang in the choir, visited the sick and shut ins, counted the offerings, took the roll, taught Bible study--without need for even a pat on the back.  Those who volunteered among the poor, the children, the devastated and never sought approval.  Those who faithfully showed me how to serve--how to be a member of a community of believers--how to be the hands and feet of Jesus--without need for fame or acclaim.

I am thankful for all those who went before me and showed me the privilege of service--taught me the principles of faith--and gave me an example to follow.  Those many saints--who are no longer with us---and yet their example lives on through me and others in their paths who took note---and followed.  I am thankful for the saints who showed me Jesus and His plan for my salvation.

Here is the REALLY good news, Friends.  The scripture is filled with references to us all---all of the Believers---those present and accounted for and those who have gone on before---we are ALL counted as Saints.  WOW!  Though I seldom feel saintly---The Book-tells me I am a Saint!  When I am wayward---wandering around in the desert---lost as a goose--and yet I believe---I am a Saint!  HOW great is that!

I am thankful for the opportunity I have now to live the life which will be an example for those in my path.  The privilege to inspire, teach, serve, and lead those within my sphere of influence.  I am thankful for the gift of being called a saint when I have gone on and even better in the present.   What a blessing--the assurance of being among the throngs of saints.

Giving thanks to the Father, who has qualified us to share in the inheritance of the saints in Light.
Colossians 1:12
Posted by lulu at 4:00 AM