There seems to be a direct correlation between retribution and justice--but is there? 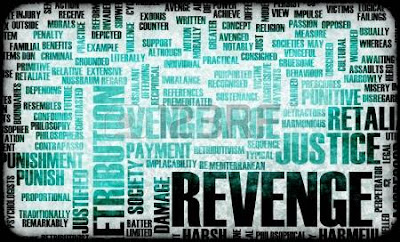 The desire for retribution perhaps comes from a darker place than the need for justice.  As I thought over the horror of the events in Syria this past week, it would seem our missile attack came in retribution for the heinous chemical attack upon the innocents.  A retaliation -no - for retaliating involves a counter attack by those who were attacked.  These innocents have no force of strength and no means of attack.  Retribution is punishment inflicted upon another for a wrong, and my question becomes were we punishing Syria to get even for the lives lost?  Those missile strikes did not bring back the innocents who died--their loved ones will forever mourn their loss--with or without a missile strike.

Justice has several definitions, but the one that seems pertinent

This blog is not a political forum and I am not weighing in on the political hot potato of this scenario, but instead using it as a means to illustrate today's post.

We all have suffered wrongs in life---Living Life 101 clearly states you will not always be treated fairly as you stroll down the path of life.  The question of character then becomes do you seek retribution or justice?  I am human---I have cried out for God to smote the head of those who have wronged me--rain down pestilence--send the plague of boils--at a minimum grow a L A R G E wart on their nose!

I WANT PAYBACK!!  The truth of the matter is--even if that huge wart did grow on their nose---my circumstances would not change.  The deed cannot be undone--the harm has been done--there is no going back.  Would I feel better?  Perhaps for the short term--but probably not.

Is there ever justice?  If justice is equitableness, then it would appear another being inflicted with the same pain and suffering they inflicted is just.  Would another suffering as we have diminish our pain and suffering?  Would our circumstance change?  Is there ever righteousness in administering justice?  A convicted murderer is sentenced to die---does his death bring back the loved one lost?  Will his death diminish the pain associated with the loss which must be endured every day?

Our hearts cry out for justice and we tell ourselves retribution will make it all better--but will it?  There certainly seems to be a legion of cases for retribution and justice is sought by us all, but neither of these will ever ease the burden of the wrong.  There is certainly a need for laws--as we see from The Word--and consequences when these laws are disobeyed, no one wants to live in a lawless society.  We are speaking of the effects of justice and retribution-and if they make a difference in the consequences of the wrong.

There was an innocent man beaten, scorned, and hung upon a cross long ago.  He died in the most gruesome of circumstances--never having committed a wrong.  They stood around and watched him slowly die an agonizing death-with a spear to the side the final death blow.  As his life force spilled on the dirt, did God seek retribution for this wrong?  Was their justice in letting those who killed him off--seemingly Scot free?  Where was the justice!!  God deserved retribution-justice was His for the taking!

It all happened accordingly to God's perfect plan--a plan of grace.  The plan is not ours to question--it is instead a free gift of infinite holy mystery.  Where was the justice--why no retribution---not our plan, but His.  We forget those involved--they were merely tools in God's grand plan to give us a plan of grace.  Yes, they did the deed, but NOT without God's willingness.

God is a just God--though we may never be allowed to see His justice rule the day--His attribute of being just is non-alterable.  Now HERE, My Friends, is where faith comes in---we must have faith that God IS just.  His will--not mine-His plan--not mine---TRUST HIM!

Dear friends, never take revenge. Leave that to the righteous anger of God. For the Scriptures say, "I will take revenge; I will pay them back," says the LORD.
Romans 12:19