It has come to my attention that Hero--the pint sized wonder dog is not trained--he has ME trained!  Currently he is on a tangent of waking me up anywhere from 5 to 6 EVERY morning to go for his first walk.  In case--you did not realize--it is NOT really daylight yet at 5 AM! 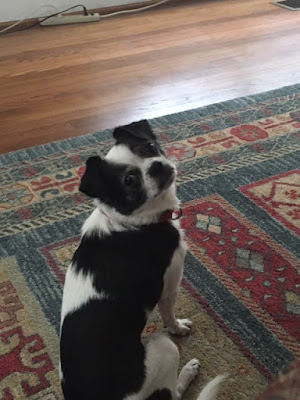 Hero is a canine psychopath with an identity crisis.  You see--he does not know he is a dog.  He thinks he is human---but human with canine characteristics.  Having identified me as the Alpha of our small (two) pack, he makes every step I do when I am in his line of vision.  WELL--until it is bedtime and then I am on my own.  After his final walk of the day, he is out for the count and good for nothing! 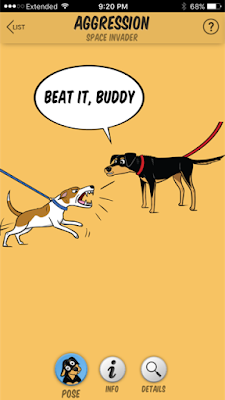 Unfortunately Hero is anti-social with others of his own type---IE--DOGS and has never seen a cat he didn't hate.  Our walks have turned into walk about's.  We walk about trying to avoid all the other dogs being walked.  When he sees another dog, he immediately begins this spitting and snorting which leads to an exasperated blowing while his hackles are raised and he is straining to get out of my arms.   I am constantly on alert--because he will literally choke himself pulling on the lead to get to the other dog/cat and the solution is ALWAYS to pick him up.   Part of every walk is spent with me carrying Hero--somehow this defeats the purpose of what we set out to do. 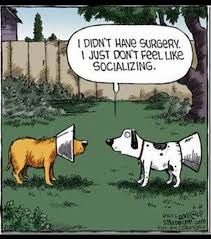 AND--he does not seem to realize he is eight pounds - soaking wet!   It does not matter the size or breed of the other intruder in his path---he is going after him.  He has attempted to put the new puppy in his place as well as the Jennings' lab and boxer while staying with them.  Someone has to step in before he becomes a grease spot on the sidewalk. 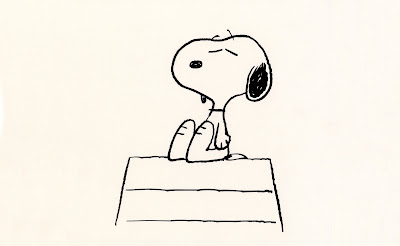 Bottom line--Hero thinks he is something--he is not.  He has convinced himself he can take on the world and tries his best to do so---with no awareness of the consequences.  Not satisfied with being an eight pound wonder--he is going for the gold--out for revenge--settling the score--ALL with a huge chip on his shoulder.  Hero is not a fan of "What the world needs now" or "Peace Like a River"--in fact his favorite song may well be "The Theme From Rocky".

The trouble all begins with Hero's failure to acknowledge who he is--a hybrid cross of a chihuahua and pompano--he is NO attack dog.  Why he wouldn't even qualify as a threat to the neighbor's cats.  Somehow he has lost the ability to see himself for who he really is.  AND the truth of the matter is there is not one thing wrong with the real Hero.  He has been great company for me, barks when someone knocks, and all the kids love him--he is their size!  Hero though is not satisfied with who he is--and instead wants to project the image of being a ninety pound pit bull-attack dog.  He doesn't seem to realize--I would not have let him come live with me if he had been a pit bull---but--cute little Hero has a place by my side. 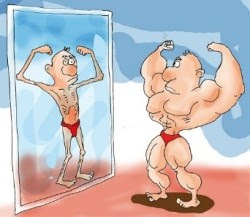 We humans are often guilty of trying to be someone we are not.  We convince ourselves the image in the mirror is not what it seems.   Perhaps it all started in the Garden of Eden when Adam and Eve could not be satisfied with all they had been given--but just HAD TO HAVE the one forbidden fruit.  We are all a conglomeration of our environment, experiences, genes, and education.  I have finally figured out---who I am is NOT such a bad thing--in fact I am rather proud of God's handiwork when I take it all into account.  Who am I to change the creator's masterpiece in any one of us--but especially me.  So-no pretense-no false fronts-no bravado-- it's just me--as God intended.

3 Your beauty should not come from outward adornment, such as elaborate hairstyles and the wearing of gold jewelry or fine clothes.
4 Rather, it should be that of your inner self, the unfading beauty of a gentle and quiet spirit, which is of great worth in God’s sight.
I Peter 3: 3-4