Recently I have seen quite a bit of social media conversation about the existence of God and I have been rolling this around in my head.  That post will have to wait.  Today after hours of watching Irma hurling herself at us on TWC (MTV for Senior Citizens) my thoughts are turning to the disasters in life. 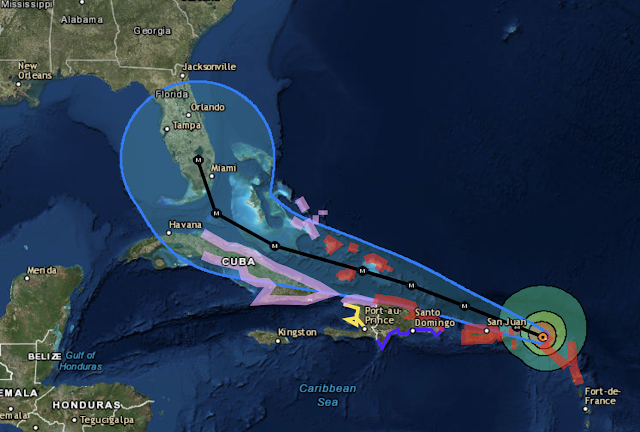 Recovery has only just begun from the devastation of the flooding caused by Harvey and the focus has already been turned to perhaps the most devastating hurricane ever seen.  As I read of crews being assembled to head to southern Texas this morning, I thought how the focus by the national media has turned from the devastation suffered by so many in Southern Texas to the next big disaster story of Irma.  We seem to be reeling with disaster after disaster--unable to catch a breath before the next one raises its ugly head. 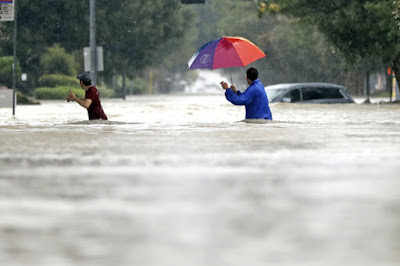 This picture does a wonderful job of depicting what many are feeling.  Even while wading in waist deep water, there is a need to keep our heads dry and above water.  We grasp at the little things we can do when surrounded by the flood waters of disaster. 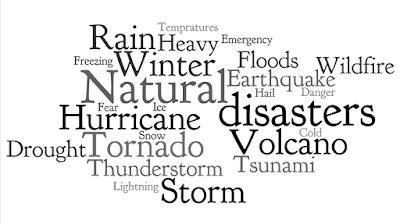 The question begs to be answered, "Why would a merciful God allow these disasters?"  If God created this universe and set the forces into motion which control the weather, why would he allow disasters?  Some might say it is His judgement on a fallen world.  That does not play out in my book.  The flood made no distinction between the rich or poor, the Believer or Non-Believer, the righteous or the sinner.  The flood waters covered them all.  These disasters created by nature are a consequence of a fallen world.  When man chose to be disobedient (aren't we all?),  the perfection of Eden was taken from us.  Could God prevent them-YES!  AND who is to say that He does not spare us time after time?

Why doesn't He prevent them all?  We all must agree we have seen the best of mankind in the aftermath of some of the greatest disasters.  Men have forgotten their differences and pulled together to rescue those in the path of the destruction.  God can and does show Himself in a mighty way in some of the largest disasters.  He uses these disasters to remind us-He is Here.  God is present--we become so wrapped up in our busy world---we forget to look for Him.  We forget to look for His path for us.  He has our full attention when all seems to be lost.  All our worldly possessions are under six feet of water, but our heads are still above the waves.  Someone is reaching a hand out to pull us to safety.  We are reminded God is with us--in the good weather He has sent us for most of our lives and in the floods He allowed in the matter of a few days.  God is with us through it all---and sometimes we forget to seek His face--to know His presence--to experience His grace.

God is always present--in the good and in the disaster--God is here.