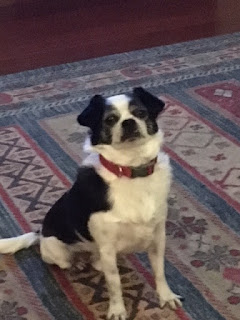 Hero, The Wonder Dog, went with me to Texas to watch the grands for a long weekend.  The back ground story on Hero is he was once the grands' dog.  He came to live with me following a back injury just over a year ago which prevented him from running up and down the stairs in their house.  Hero stayed outside a great deal of the time when living with them (he hid in the bushes for some strange reason--perhaps staying out of the path of the two littles). .  We ALL know Hero is a known runner.  After landing in the slammer a few times, they had an invisible fence installed, since he was so small he could slip between the iron fence slats of the back yard fence.  Hero never tried to run out of the invisible fence.  The warning the collar gave him was enough to keep him in the yard.

Fast forward, Hero has lived with me for over a year, we are going back to their house for the weekend, and I am more than a little nervous about him making a break for it.  He no longer has the receptor collar and his replacement, Brock, has inherited the sensor for his collar.  Hero is still a nervous Nellie around the littles and prefers to stay outside.  I am understandingly nervous about him heading for the hills since I am not sure he remembers the threat of being shocked if he leaves the parameters of the fence. 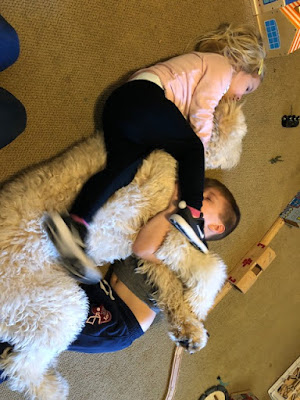 Turns out The Wonder Dog has the memory of an elephant and never tries to make a get away the entire weekend. His past experience has been a great teacher and he has not forgotten the threat of possible pain if he sticks his neck out.  Poor Hero---he loves to wander ---and he missed his big chance (not that I am complaining).  There was a whole world out there waiting to be sniffed and marked and he missed his golden opportunity for fear of being shocked.  A shock that could not possibly happen. 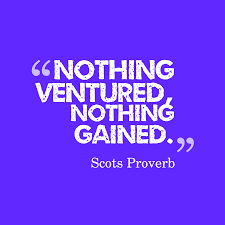 This is remarkably like our own spirit of timidity when it comes to the possibility of  being hurt, embarrassed, in pain...  Once we have experienced a painful or unpleasant experience, we begin to guard ourselves against the chance of suffering the same consequences again.  We put an invisible fence up around our hearts and refuse to take any risks or steps that might lead to pain.  We forego the possibility of great things, big adventure, new relationships because we fear the risk of pain and suffering which might happen.  We stand behind the invisible line we have drawn in the sand and dare not cross when we give in to our fear.  The  old saying "Better to have loved and lost than to have never loved at all" perfectly portrays what I am trying to say.  "Nothing ventured, Nothing gained" is another great phrase describing my thoughts.  Stick a toe in the deep end and test the water---What is the worst thing that could happen?  A little shock--but the better question is What are we missing if we don't try?

7 For God has not given us a spirit of fear and timidity,
but of power, love, and self-discipline.
II Timothy 1:7