Hero, The Wonder Dog, is always teaching me.  I suppose anything we watch and observe a great deal would naturally be a great learning tool.  Hero is a needy--neurotic little guy and he is always by my side or the side of one of his humans.  (Remember he doesn't realize he is a dog--thinks he is one of us.) 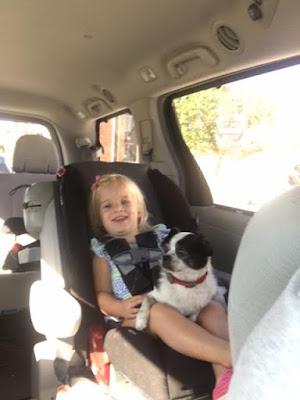 As I have told you before, I take The Wonder Dog almost everyday to the Parish Park for a walk.  We make one loop around the lake (a mile and a quarter) and head back home.  That's a LONG way for his little legs.  I happened upon a conversation recently while walking him with a fellow who walked up while Hero was sniffing the green off a blade of grass.  After a brief conversation, I left the path, I told the man we only made one loop since Hero's legs were so short.  He told me I would have to make 6 loops based upon the difference in our leg length to equal his efforts.  I DIGRESS! 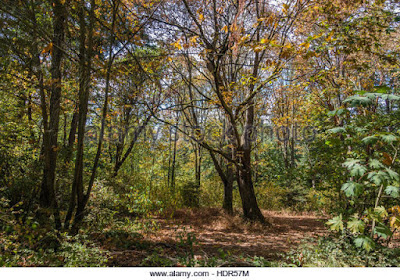 We occasionally make the big loop around the perimeter of the park.  It had not rained for all of two days this week when I decided I needed a change of scenery and we would walk the perimeter.  Hero is good to go when we first start this route.  The beginning of the path is a fire break and wide enough to drive a car on.  The first right angle turn we make though soon has us on a narrow path through the woods.  Hero immediately clues in to the fact that he has been duped.  He comes to a dead stop and turns his head back to the way we came from.  NO amount of coaxing can get him moving forward which necessitates me picking him up and carrying him for a while.  (Seriously-I am out to walk the dog and end up carrying him--WHAT is wrong with this picture!) 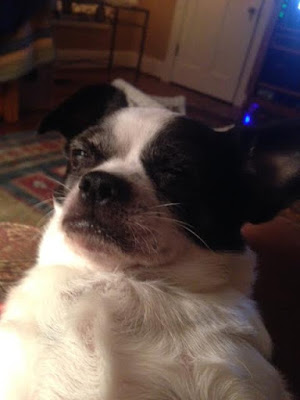 Hero is a city dog.  He was found wandering the city streets of Fort Worth  He likes sidewalks and paved roads.  This strolling through the woods is completely out of his comfort zone.  I have to force the issue from time to time.  BUT if Hero had not gone with me on the stroll through the woods that day, he would have missed a big thrill.  Trying to avoid the water on the trails, we cut through the woods to hit a dryer trail.  Low and behold, we spooked four or five deer,.  He JUMPED into action convinced he could chase down the biggest four legged creatures he had ever seen.  His tail waved in the air and he snorted and blew with all his might.  And those big creatures ran from him. HE LOVED IT!  Had we NOT gotten out of Hero's comfort zone and taken the trail less traveled he would have never seen them and missed thinking HE scared the big guys off!  The deer do not come out in the open when folks are walking around the lake, so there is no chance we will run up on one walking around the lake.  He had a new spring in his step (well except for when I had to carry him up the hill he thought too steep) for the rest of the walk.

The book our small group is studying Search of Significance addresses the lies from Satan we have believed and the impact they have had on our lives.  One of these lies produces "The Fear of Failure".  We become so fearful of the pain of failure that we withdraw and refuse to try.  What wonders have we missed when we don't even attempt things?  The very first hiking trip I went on, within a few hundred feet I was defeated and thinking I can't do this.  The acclimation to high altitude is tough--even if you are in great shape, especially for a flat lander.  If I had accepted the message of the voice in my head--the wonders I would have missed!  There are times, My Friends, it is better to try and fail than to take the safe route of never attempting.  If you never walk into that crowd of strangers, who might you miss?  If you are afraid of getting hurt, what thrills might you miss?  And if you are unwilling to share the story of God in your life, who might be eternally impacted?

I have cried many a tear over loosing pets.  I swore I would never have another one, with the cost of caring for a dog, the fact they tie you down and then you love them and they die some day.  What lessons I would have missed had I not taken Hero in when he became injured!

9 Have I not commanded you? Be strong and courageous.
Do not be afraid; do not be discouraged,
for the LORD your God will be with you wherever you go.”
Joshua 1:9