I am always amazed when I see God working in my life.  At times it is the most unexpected of ways.

My blogging friend, Linda, lives far away in the frozen Northeast.  We met on the great waves of the Blogasphere and our friendship has grown over the years.  We share one most important identifying trait---a great love for God the Father and Jesus His Son.  Linda has a book club about once a month on her blog HERE.  As most of you know, I keep several books going at a time and am teaching the current Bible Study book.  So there is little time for extra reading.  I was intrigued with her choice of book and agreed to read this one~ 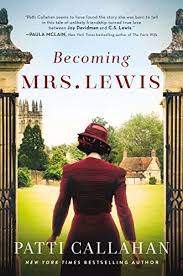 C. S. Lewis is one of the modern day icons of the faith.  He prolific writings in a variety of genres has widely influenced young and old alike.  Frankly, I had him up on a pedestal.  Why wouldn't I want to read a book about his wife.  And then I started it.  Have you ever had a book that you picked up and put down repeatedly?  Declaring my anguish over the details of their relationship, I would put it down and promise I was finished.  The next thing I knew I would have it back in my hands needing to know if the story would ever redeem itself.

C.S. Lewis had feet of clay just like the rest of us.
The relationship with Joy (his wife to be) began as an emotional affair.  As I have thought this over, I don't think there was even a concept of emotional affairs during the time period this happened.  We now recognize sharing intimacy of any kind with someone other than your spouse can be an emotional affair.  Throughout their relationship, Mr. Lewis maintained boundaries when it came to any type of physical relationship.  Clearly Joy yearned for this, but respected his clear reservations.  She was a married woman in a marriage with an abusive and alcoholic husband.  BUT she was married.

I saw God's Word woven all throughout the story.
I thought of Job and his suffering and loss.  I remembered David, the one after God's Own Heart, who also messed up big time and not just once.  Bathsheba also jumped off the pages as I remembered the tragedy of the loss of her baby. And finally Moses came to mind as I reflected upon his not being allowed to go to the Promised Land.  All that wandering around, arguing with the stubborn people, putting his life on the line and he does not step one foot into the land promised because of his disobedience.  All of these suffered consequences of their actions.

God answers prayers.
After Joy's diagnosis of terminal cancer, Mr. Lewis prayed he could take her pain.  He was then struck with his own debilitating disease.  Joy, in the mean time, was in remission.  They had three years together before she finally passed away.

Redemption clearly works it way into the story.
God is in the redemption business.  He desires to redeem our stories.  This does not mean we will not endure the consequences of our sin.  A Grief Observed was written after the tragic death after a brief marriage to Joy. It is a testament to the intense loss of his great love endured by Mr. Lewis.

God gives us a free will.
God knew how this story would play out, but he did not intervene and stop the relationship.  This could have possibly called into question one of last century's greatest Christian writers.  God allowed it to happen.

God uses the unexpected.
C..S. Lewis was not a believer until he had a Paul like experience.  Interestingly enough, Joy had a similar experience and she was born Jewish.  What a duo!  There was never any doubt in my mind that they both loved God.  No matter what their relationship, God can still use the words of a great writer to influence countless others for years to come.  In my lifetime, C.S. Lewis is perhaps the most quoted Christian writer beyond the Bible.

I am glad I finished the book and will continue to ponder the lessons for some time to come.  There is no doubt we all have done things which cloud our witness and bring into question our faith.  BUT GOD---the Great God of the Universe--he is in the business of redemption.


2 Let the redeemed of the LORD tell their story—
those he redeemed from the hand of the foe,
Psalm 107:2