Before the initial shock of loss of a loved one is over, you immediately have to deal with funeral plans.  Different families handle this in different ways.  I am well known for slipping away and avoiding sad good byes, and personally this is how I would prefer to go out of this world.  The truth is that funerals and memorials are not for the dead, but for those left behind.  It brings closure after those final goodbyes. Good for all of you who have thought ahead and preplanned all of those final rites.  I speak from personal experience when I tell you it is not easy to make these plans from ground zero, especially when the loss came unexpectedly.  Numb and in a fog of disbelief is an understatement. 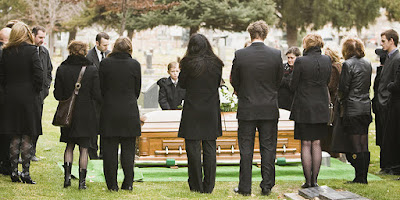 That final day of saying good bye can be absolutely gut wrenching and exhausting as you walk through it on automatic pilot.  Once the final hand is shook and the final hug is given, those surrounding the grieving begin to disburse and go about their daily business.  Those who mourn are left, sometimes with family, and other times alone for that last visit to see the closed grave.  The final indication the day has come to a close.

The day after begins the true journey of grief.  The new normal is anything but normal.  What once was two becomes one, the parent who was only a phone call away no longer answers the phone, a hole has been created which can not be filled.  Somehow--some way---those who are left figure out how to put one foot in front of the other, to carry on with their daily routines.  Grief is not unlike ocean waves--appearing out of no where with enough force to knock you to your knees.  It ebbs and flows with a life of its own--a life of different intensity and length for each of us.

On the first Easter, Jesus was in the grave on the day after-The Sabbath. The tomb was sealed and guarded--finality was becoming apparent.  A day set aside to honor God and rest--even at the death of Jesus,  this was honored and those left behind sat steeped in grief.   All hope was lost and those who loved him were reeling with sorrow and fear.  The disciples fearing for their own lives were drowning not only in sorrow but confusion.  How could it end this way?  The day after must have brought tears, sorrow, and furrowed brows.  Filled with concern on what way to go--how to cope--those who loved Him best were consumed with sorrow and perhaps anger.  How could He be dead?  How could He be in the grave?  It had been witnessed, they knew He died--they knew He was placed in the grave.  What would they do without Him?

The day after was quiet and filled with profound sorrow---

but Sunday was coming!

"At the place where Jesus was crucified,

there was a garden,

and in the garden a new tomb,

in which no one had ever been laid.

Because it was the Jewish day of Preparation

and since the tomb was nearby,

they laid Jesus there."