A LITTLE TONGUE IN CHEEK TODAY--

FOR THE GIRLS IN MY WORLD--

Here I am---almost a year into exclusively weight training---pumping iron--at least 2- mostly 3 times a week for an hour each time.  During the past year I have probably averaged 2.5 times per week for the past 52 weeks or roughly 130 sessions.  Each hour session has around 800 + repetitions so I have lifted that bar 104,000 during this year at a minimum.  With a minimum of 15 pounds and as much as much as 50 pounds depending upon the muscle group I am working.  That would mean at an average of 32.5 pounds I have lifted approximately 3,380,000 pounds during a year.  COLOR ME TIRED!  No wonder I have not done much else!  (WHO ELSE but an accountant would want to do this math?)

Here is what I have discovered, Girls----Some things I thought were permanently lost----I HAVE FOUND THEM!

Let me begin with my arms---I thought I had lost my biceps---turned out they were hanging out with my triceps--just flapping in the wind most days.  I am happy to say I can now raise my hand whether in praise or in question with no fear of taking flight! I am rather pleased with the loss of my wings--although one of my dreams is being able to fly!

Then there are the shoulders which hold those lovely wings up.  The protrusion of the shoulder blade is now nicely covered with a row of muscle that begins at my neck and nicely rounds over and into my upper arm.  AND NO MY NECK HAS NOT GOTTEN THICK--my head may be thick---but that's another subject.  I lift those 3 Fort Worth grands--the biggest around 40 pounds and do not miss a beat.

First time down on the bench during our session, we are working our chest---pecs---Who knew things could once again be up-tight and without the benefit of metal or elastic?  And the added bonus---the top part of that six pack has a defined line right down the middle--sort of like the dotted line we see so often.

Then we go to the back and lower regions---as in really low back.  Once again my jeans are nicely filled out with my rear which it turns out had not abandoned me but merely gone south.   All it takes is about ten minutes of squats and lunges to get things headed back toward the promised land of the equator.  The added bonus---your legs from the knee up become hard and firm.

Lest I forget---the abs.  The last group worked each session---Could I just tell you this is the easiest part of the hour?  Upper abs---lower abs---planks--crunches--leg lifts and extensions...they are all a breeze after all the other.  And yes--I have indentations instead of love handles now in case anyone grabs on.

SO SISTERS!  I am here to testify---What was lost---has been found!
Could I give you a firm word of truth----GET INTO THE WEIGHT ROOM!
All has not been lost---it was just hanging around waiting to be found! 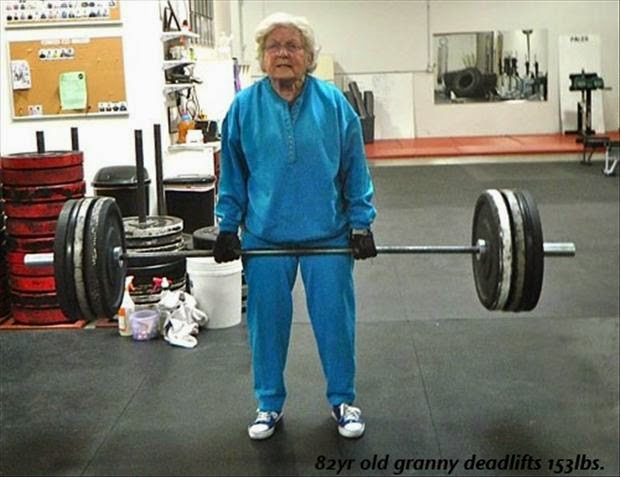