Do you remember the story, I told you here about my 2 year old grand and "hurting his feelings"?  The little stinker has adopted "you hurt my feelings" as his new mantra.  He seems to have picked up on the positive feedback his original proclamation drew and has expanded his hurt feelings declaration to anything which does not go his way.  Why he has even begun putting in a good word for his brother when he is being reprimanded by telling me, "You hurt HIS feelings!"

Following a day filled with his tender feelings being hurt over any and every thing which did not have his desired outcome, I was over the top and beyond sympathetic when it came to "his feelings".  After a couple of days of hurt feelings bulletins, my retort became " I'LL SHOW YOU HURT FEELINGS!"- and then proceeded to tickle him until he collapsed in fits of giggles.   Like the little boy who cried wolf--he had played that card one to many times and my sympathy had grown thin--to non-existent. 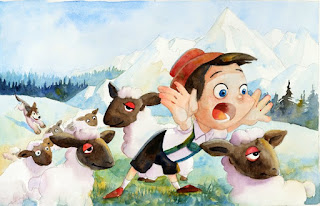 A sharp reminder of my prayer life.  I am quick to yell for help or plead "hurt feelings"---I've been put upon---when things have not gone my way.  God has graciously answered many of my prayers---thus leading me to cry "Wolf" over even the mundane.  Yes, I know, God wants to hear it all---but when my prayers cease to line up with His Word--His Will--I still cry, "Wolf" and sit and wonder WHY He has not given me what I keep pleading for over and over.  The idea that perhaps my desire does not line up with His perfect plan--never bubbles to the surface.  For SURELY---my plan is the best plan!

I know what is best for the two year old--and his attempts to sway me by repeatedly bringing up how hurt his feelings are over not getting his way never changes my course.  So it is with God, my whining about the fairness of it all, does nothing to alter His perfect plan--for my best.

The two year old will learn to trust me--have faith in my judgement---know he can count on my love for him to always provide for his best.  There are days I wonder---will I EVER learn?  He has not given up though--He is still teaching me!

For I know the plans I have for you, declares the Lord, plans for welfare and not for evil, to give you a future and a hope.
Jeremiah 29:11
One Of My Favorites!
Posted by lulu at 6:00 AM