THOUGHTS WHILE TRAVELING-REALITY VS EXPECTATIONS

Off to our next location, but this time we are with a guide who is driving us in a van to our next stop with a couple of side trips in the middle.  Sigmund, our guide, was raised in South Africa, but his father was a veteran of World War II.  Moving to South Africa after the war, Sigmund was born when his father was 53.  Most of the Germans we spoke with who were willing to talk about the war gave us the distinct impression they would like to leave the war and all it entailed in the past.  One of the guides made a point to tell us they had no national holiday honoring their war heroes.  I will refrain from commenting on this until a later day.

Riding through the Bavarian region of Germany, our first stop of the day is Neuschwanstein Castle--also known as the Cinderella Castle. 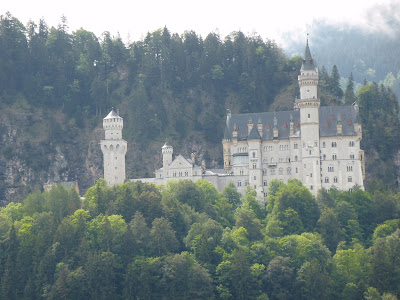 Built by crazy King Ludwig and never completed, the castle was lavish in carvings, bronze, tapestry, and lavish beyond descriptions.  Though the castle was never finished, we were told the story of a life a toothless, obese, recluse holed up until his mysterious death in his monument to narcissism.  Once again proof that riches will never make you happy. 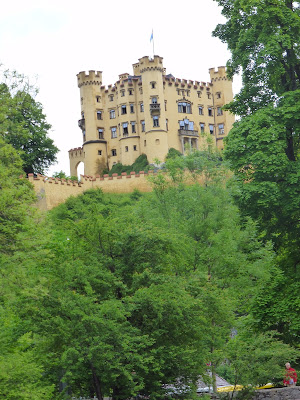 He supervised the construction of his own version of the Great Pyramids across the way in his father's castle.  One has to have a place to stay during construction.  Not exactly slumming in my book! 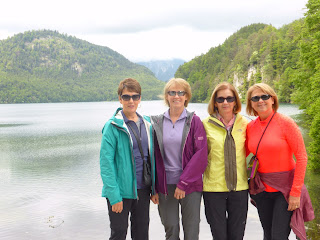 Beautiful Swan Lake at the base of the mountain where the castle sits.

When our guide finds out we enjoy hiking, he insists on leading us up the most difficult path to the castle.  WHY is it everyone has to prove to us their hiking paths are the hardest??  So glad to finally make that last turn and catch my breath!

Leaving the castle, we make a stop at the Alpine Slide we have all been chomping at the bits to try.


And actually get this-- 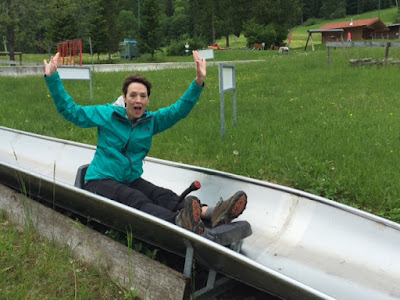 Sometimes it is best to keep one's expectation to a minimum and then you will not be disappointed and perhaps be delighted.  I must admit looking back--it was a great laugh.

Off we go through the back roads of the Fussen area filled with quaint Bavarian villages and hair pin turns on our way to Salzburg and another country---Austria. 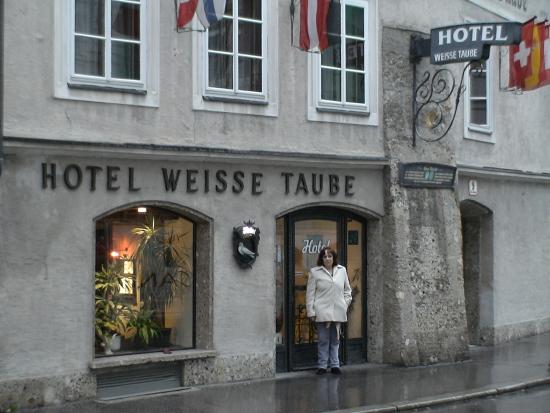 This photo of Hotel Weisse Taube is courtesy of TripAdvisor

After checking into another boutique hotel in the Old City, we head down two doors to enjoy a traditional Austrian meal---all part of the traveling experience.  Did I mention--the rain has followed us-YET AGAIN!


that you may be children of your Father in heaven. He causes his sun to rise on the evil and the good, and sends rain on the righteous and the unrighteous.
Matthew 5:45
Posted by lulu at 4:00 AM