No trip to Austria would be complete without a trip to the Eagle's Nest.  A trio of bus rides gets us to the Obersalzberg Documentation Center.  A complex underground city built by the Nazi's, much of the system was destroyed in the 50's.  There are those who say it was destroyed in an effort to erase reminders of the Nazi rule and the horrors it reaped. 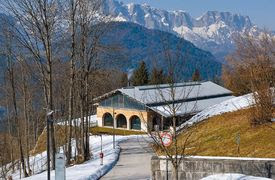 All you see from the outside is this building, but inside is a complex system of the remaining bunkers and the museum filled with historical facts concerning the war and this area.  NO there was no snow-I had to take this from the public domain since we did not have a good picture. 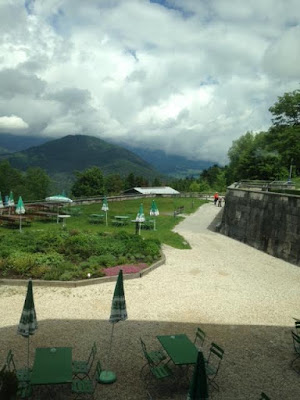 The view from the restaurant on the grounds was beautiful, but I ask that you carefully look at the sky.  Taking yet another bus up to the cave entrance to the Eagle's Nest, we became totally socked in by the clouds. 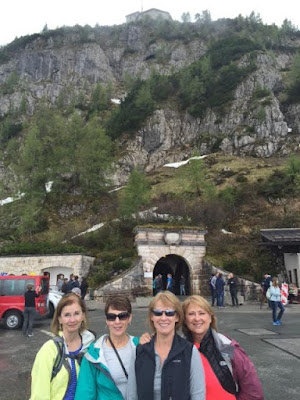 Walking through the cave which the entrance is shown above, the water drips on your head every step of the way---resulting from all the rain we have endured. 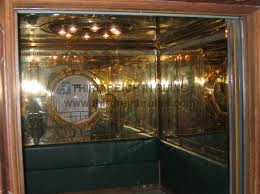 Stuffed like sardines on this opulent elevator, we are informed this is the original elevator as constructed during the war.  This is not exactly comfort inspiring to know the mechanism is 70+ years old. 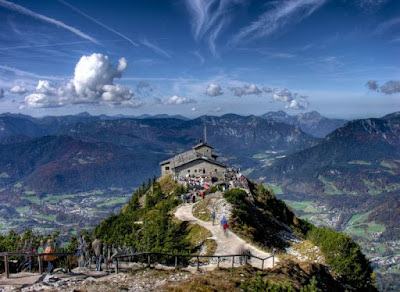 If we had been there on a clear day, we would have enjoyed this view-again from the public domain.  Unfortunately we were lucky to see our hands in front of our face.  Not to be deterred, we walked the trail to the very top to gander into the clouds--literally. 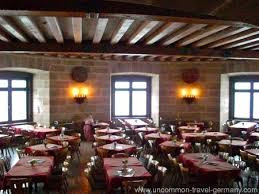 We ate a unmemorable lunch in one of the original rooms of the Eagle's Nest- containing the original stone fireplace.  It was evident where the American soldiers had chipped souvenirs to take home when they finally obtained control.  My journal tells of the eerie feeling knowing I was sitting in the same room some of the darkest and most sinister war criminals enjoyed during their rule of terror.  Why my feet may well have trod in the same footsteps where Hitler walked.

We were told Hitler preferred his chateau further down the mountain, but it was burned during the conquest.  Watch the 10th episode of Band of Brothers to see what we saw.

On our way back to town via bus, our trip planner instructed us to get off the bus 12 minutes toward Salzburg at the Kugelhuhle stop.  It is never good to tell a mathematician something like this, because my head is going, what if we are traveling slower or faster than the original bus?  Thankful we see the sign for Kugelhuhle since the bus driver speaks no English--and I never recognize the names when they announce them.  PERHAPS, I mispronounce them?

We are off to take a hike along Almbach Gorge and the nineteen bridges.  Thankfully, I did not have to count them, since the numbers are marked on each bridge.  A beautiful hike through this gorge with a roaring stream cascading from the mountains surrounding it. 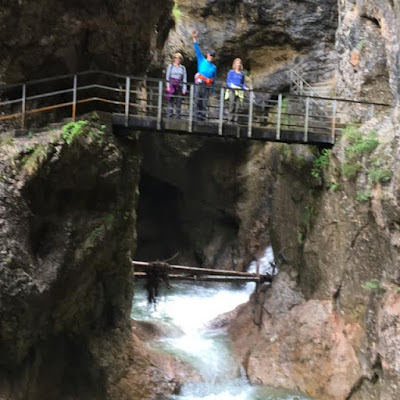 The trail ends by the Sulzer Waterfall shown below.  AND LOOK--there is a bright light in the sky---WHY, YES, THE SUN IS SHINING! 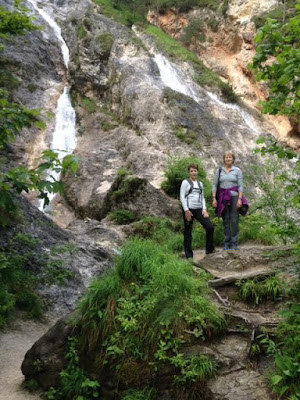 Catching the bus and heading back to Salzburg, we sit by a couple of nice young men who are also traveling through Europe.  As we swapped stories, they tell us their guide in Normandy, informed them the Russians liberated it---As If!--READ YOUR HISTORY BOOKS---look at the graves there!

You would think we had had a long day---but Sonja and Babs go for a bike ride upon returning.  I am once again studying the next day's plan since our trip foreman, Sandra, left me the sacred pouch with all the information.

There is a music festival outside our hotel doors and we hit the street and the vendors to enjoy BBQ chicken and the best fried potato chips I may have ever eaten.   All that and hordes of people and plenty of loud music---thankfully they roll up the streets by mid-night.