THOUGHTS WHILE TRAVELING-THE HILLS ARE ALIVE

The next day brings more rain--but not to be thwarted again, we don our favorite rain jackets and head out for "The Sound of Music" tour.  Interesting fact---though most Americans have seen it at least once, the Austrians are often clueless.  Also Maria Von Trapp sold the rights for the movie to Hollywood for $10,000.  Somebody took BIG TIME advantage of her.  In true "Maria" style, she is reported to have said the story needed to be told, no matter what she received.

The only thing we did not see was the cemetery the Hollywood set was to represent.  Also, the church Maria was married in would not agree for the film to be shot there.  We saw the church where the film was shot, but keep in mind it is not correct historically. 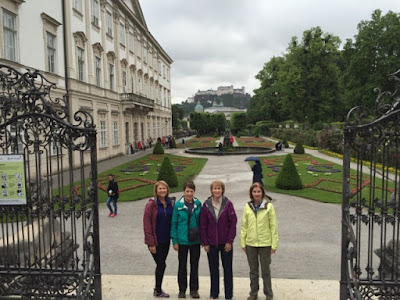 The estate used for the filming which is now a private hotel.  This is the lake where the children were boating. 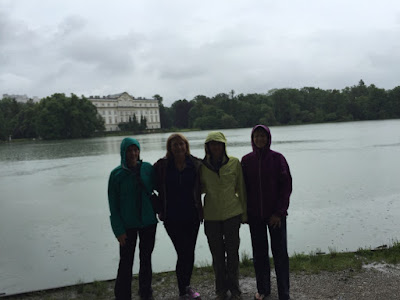 The romantic gazebo which is not on the estate property, but at another castle in the vicinity.  "I must have done something right." 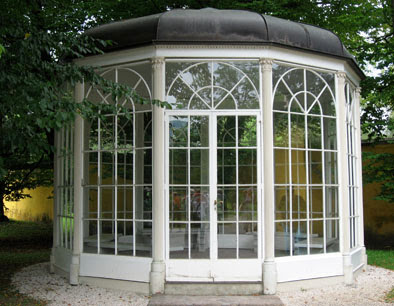 A beautiful old tree directly by the path leading to the first building shown above.  I seem to remember several scenes in the movie with that building. 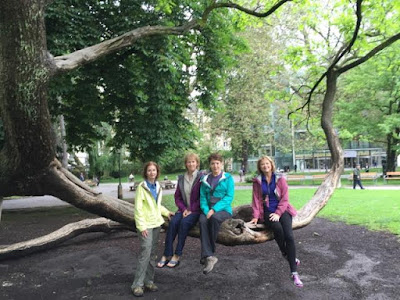 Heading off through the beautiful Bavarian country side, we finally arrive at the church where the wedding was filmed.  There is no way a picture could do it justice.  As I stood at the back, I could envision Maria floating down the aisle with her handsome bridegroom in full uniform waiting. 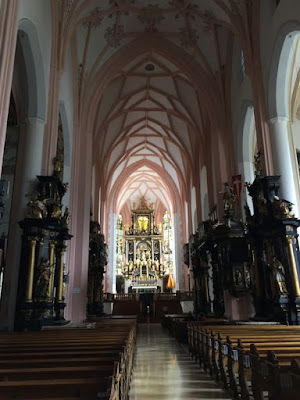 This area is also home to one of the most popular pilgrimage routes in the world "The Way of St James".  Our guide was very knowledgable, but drove like a mad woman and spoke like a sailor at times.  She also was VERY political and informed us George Bush's grandfather financed the Nazi's during WWII.  When Sonja confronted her about her rudeness, the guide said, "It's on the internet--look it up."  YES---AND EVERYTHING ON THE WWW IS TRUE! 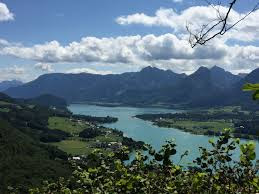 For all the reasons stated above, we cancelled our afternoon tour with this guide of the old town Salzburg.  We had heard enough!

Since the sun had finally decided to shine, we opted for a hike.  Why LOOK--there is a mountain--just outside of Salzburg--we can catch the bus to it and hike up it!  Gaisberg is waiting for us to scale it! 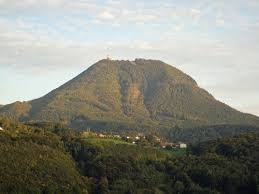 We NEVER saw the bus and ended up walking all the way to the hiking trail-NOT A SHORT DISTANCE.  And then UP UP UP--these people do not believe in plateaus --only ascending! 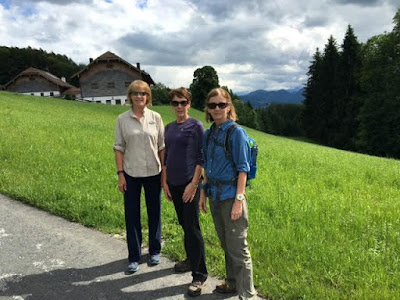 Finally finding a bus stop to take us back down the mountain, we stop and rest while waiting--what we thought would be a short time.  Some kind stranger (we met more nice Austrians than not), came hiking out of the woods and informed us we would have to wait an hour.  He told us a shortcut down to the last bus stop for the Salzburg route.  WARNING TO ALL YOU HIKERS--SHORTCUTS OFTEN SPELL DIFFICULT! 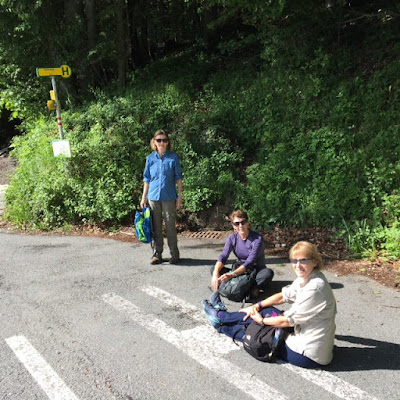 Hard to believe going down can be as difficult as going up---but trust me---with the right conditions on the trail--it DOES happen!

We finally come out in a little town, Oberwinkl, and wait for the last bus heading into the city.  Again--kind strangers tell us we are on the right bus.  So much for our figuring out the buses!   It somehow never occurred to me the American headlines could have read "American Tourists Die While Wandering Around Looking For The Bus".

I have gone astray like a lost sheep; seek Your servant, For I do not forget Your commandments.
PSALM 119:176
Posted by lulu at 4:00 AM