I am on sensory overload after the past week volunteering in the flood zone of South Louisiana.  Heartbreaking --is such a mundane description of what I came home feeling.  How many times in a week did I utter, "OH MY GOSH"  "I CANNOT BELIEVE THIS"  "WOW" and every other cliche to describe the extreme devastation I witnessed.  As to be expected, I came away with a few thoughts which I need to share.

All five houses I worked on had extensive water damage--some much worse than others.  Four of the five houses had been "Mucked out"--the water was removed and all of the furnishings had been hauled to the street.  One of the things I was told is it takes several trips for the work to be completed to get a house ready for the rebuild.  Homeowners are literally shell shocked and cling to the notion something can be saved.  Very little is salvageable.  One sweet little lady wanted us to please save a mirror which was screwed in the wall and her paper towel holder.  Can you grasp what I am telling you?  Except for a few exceptions such as clothes which MIGHT can be washed and saved and dishes which after washing are still usable---every single thing they own is piled on the street in their front yard.  It was a MOUNTAIN of possessions as far as the eye could see and for mile upon mile beyond that.  One house required hauling out a mattress which had sat in the water for 36 hours before it receded.  It took 4 BIG men to get it out and on the pile it weighed so much.  And the owners---there they sit by the house within feet of all their worldly possessions. 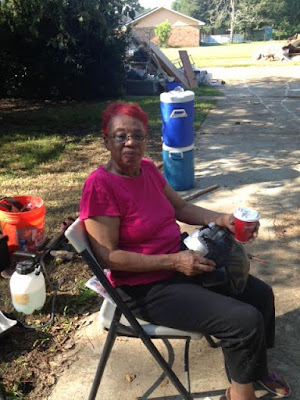 One of the lessons I learned when I went through a huge down sizing after my marriage ended, it is all just stuff.  My worldly possessions went down by over half when I sold my family's home.  The thing is I kept my treasures.  I did not loose everything I owned, nor did I see lifetime keepsakes ruined beyond rehab.  Family photos---important documents--nothing was sacred and almost everything was destroyed.  Yet, Mrs. Betty, a 79 year old widow commented, "I'm still here and we have each other.  God was good"  How difficult would it be to praise God for His Goodness when you are sitting feet away from almost everything you own and you are watching your home being demolished back to the studs?  Top that off with no help from FEMA because your house which you could not afford to give up was flooded during Hurricane Gustav and when the flood insurance quadrupled you could not afford it.  She has NOTHING---to help her rebuild.  And yet she sat there and told me, "God was good."

THAT, MY FRIENDS---is faith---THAT is wisdom!  She gets it!  When all is stripped away---all is lost---WE HAVE GOD---AND HE IS ENOUGH!  The things of this world are temporary and there is only one thing which is eternal--God.