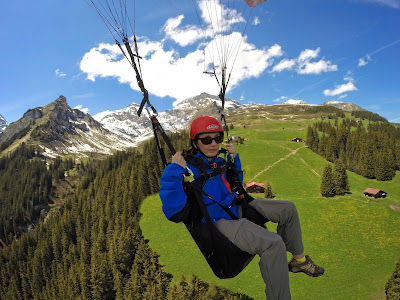 I recently put this picture up as my profile picture on Facebook and my blog.  Taken in the Swiss Alps last summer, it was truly quite the experience to para-glide the warm summer thermals over the peaks- which seemed to reach to the heavens.  I will never forget the thrill of running toward the ledge and feeling the lift off as the currents took me up and away.  Half an hour was spent spinning in slow circles and watching the eagles fly by.  Mountain goats perched on the side of the cliffs were close enough to hear bleating at their kids.  Many of you commented, many were amazed  I was brave enough to soar where eagles fly.  I must confess- Alas--what you see is not what actually happened. 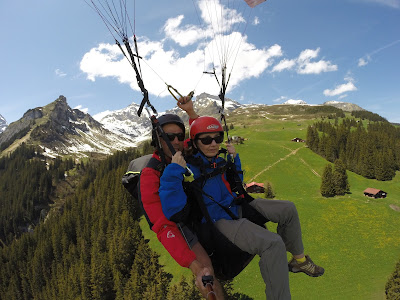 I was sailing tandem--not alone.  NOW in my defense, it still was quite the exhilarating experience and it still took a great deal of courage to run off that ledge and I truly was at the top of the world.   However I did not take my parachute to Europe and I did not have a clue how to fly said parachute if I had brought it along.  My good friend, Bill, was kind enough to photoshop my wonderful pilot from the picture.  SO what you saw--it did not actually happen as I portrayed.

The picture was originally altered for my Christmas cards.  I did not want to explain who the man was whose lap I was sitting.  After many laughs and comments, it dawned on me it would make a great blog post.

It would have been really easy to allow you to believe I para-sailed alone.  Only a handful of friends knew the truth and they would never blow the whistle on me.  While it was great fun reading all the comments, I would not be living the truth if I did not come clean and fess up. I posted a doctored picture and had everyone believing I was incredibly brave and enjoyed my undeserved moment in the spotlight.

How many times have we allowed a half truth to stand?   What motivates us to alter or amend the truth or let a misconception go uncorrected?  While my original intent was innocent, it was very enticing to allow you to think I was brave enough to para-glide alone.  The fact I was brave enough to para-glide became not enough and the allure of higher esteem in your eyes became an aphrodisiac to my ego.  I want you to think highly of me.  The question becomes--why did it not occur to me what you might think when I was exposed.

Live the truth.  It is enough.  No more is needed--no more required--know the peace of living the truth.  In the end--the truth always wins.


But whoever lives by the truth comes into the light, so that it may be seen plainly that what they have done has been done in the sight of God.
John 3:21
or
Posted by lulu at 4:00 AM