THE PRESENCE OF SILENCE

While in New York, we visited the 911 Memorial and Museum.  I walked away deeply moved. 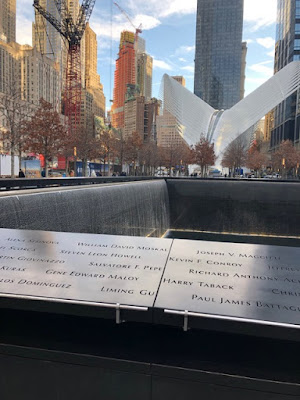 The memorial pools sit on the site of the building footprints and all the names of those who were tragically lost that day are listed.  The water is continually flowing and the scene is only disturbed by the cascading water in the giant pools.  You are encouraged to touch the names as you stop and remember.


As you enter the museum, you begin a slow descent into the bowels of the former building.  The lower you go--the quiet seems to grow more ominous.  The museum is filled with people and yet there is almost a reverent silence.

The final room you enter is filled with artifacts of all that was left after the towers collapsed.  It was strange knowing you were staring a a piece of paper that someone was writing on minutes before the plane struck or they were leaving a final note knowing the end was near.  The knowledge you were looking at personal possessions of those who are no longer with us had me thinking of the souls of each person represented.  Room after room filled with things which moments before the attack had been perhaps even touched by the one no longer with us.  It was an eerie feeling of heaviness as I considered all those lost in such a short time frame.  I do not believe in ghosts--and yet it felt as if the ghosts of those lost were hanging thick in the air as we slowly made our way through those rooms.

It was one thing to watch that day unfold via television.  It was quite another to stand in the spot where the world came to an end for so many that day.  Looking at the beautiful memorial, I could not help but reflect back to that day and the cloud of debris which rained down for blocks.  The cloud of smoke and ash which darkened the light as millions of us sat in disbelief of that which was happening.  The survivors of that day--they sometimes prefer to not speak of their experiences.  I understand.  Standing at Ground Zero over seventeen years later, I finally have a grasp on what occurred that day.  The small screen which we watch events unfold upon can never relay the true enormity of the reality of being physically present.  .

Here one moment-gone the next.  I left knowing how truly fleeting life is.  No one walked into that building that day expecting the worst day of their lives.  Those who survived--those who are left to mourn--we all--were forever changed that historic day--when evil visited the World Trade Centers.

What did I walk away with?  A profound sense of thankfulness for those who put their lives on the line everyday to serve and protect us.  A renewed sense of the brevity of life. An urgent sense of making the most of the time remaining and determination to finish well.  A heightened sense of the hope found only in God.


So do not fear, for I am with you;    do not be dismayed, for I am your God.I will strengthen you and help you;    I will uphold you with my righteous right hand.
Isaiah 41:10