It has been a while since I have cooked for anyone other than myself.  After a month of cooking for The Little People, I  could apply for a job as a short (pun intended) order cook. 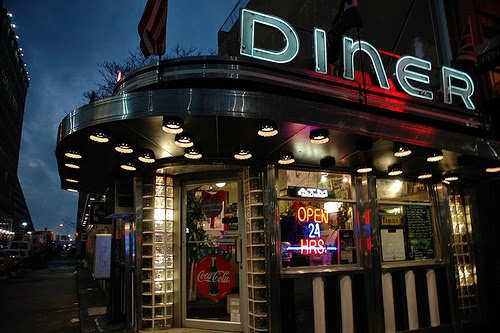 The big people in the house were happy with whatever I cooked--even those never tried recipes which left a LOT to be desired.  The Little People are another story all together.

To begin with---you will note the sign on the diner door--open 24 hours---YES INDEED!  After 3 meals a day and countless snacks between---the boys were ALWAYS starving at bedtime.  PERHAPS a ploy to drag out hitting the hay?  It was difficult to argue with "My mom and dad give me a bedtime snack."  What I wanted to say was--well in fact I am guilty of saying "I am not your mom or dad and Lulu says it's bedtime, so turn over and go to sleep."  I know MEAN--right?  After shoving food at this trio approximately every 30 minutes all day long--I might have been a little short on patience AND I counted on bedtime!

The oldest of the Little People does not eat anything---well a VERY limited menu.  I will not cast stones--since I grew up  existing on peanut butter, bologna, and white rice with butter only.  I also managed to raise a son who was just as picky .  He only liked ham when he was 3--so we told him every meat was ham.  HEY it worked for a while!  The beauty of #1 Son--if he didn't like what I cooked--he prepared himself a peanut butter sandwich. For the oldest to be SO limited in what he eats, he  is a connoisseur of those few items.  "I will take a peanut butter & jelly sandwich--light on the peanut butter and heavy on the jelly."  SERIOUSLY!  Both the older boys were guilty of asking for one thing and having eater's remorse one bite in.  Whatever the other brother had was what they really wanted.  BACK to the kitchen!

The Little Man and the next up the line are quite adventuresome and will try almost anything.  Heaven help if they do not like what they try.  The Little Man lacks social graces and will spit out whatever has offended his palette on the spot.  I did get some "What IS THIS?" in a tone that advised they found it visually less than appealing.  With a little persuasion, I could usually get them to try a little bit.

I am proud to say #1 Daughter has everyone sit at the table for their evening meals.  The remainder of the day is reminiscent of hors d'oeuvres at cocktail hour. With the only difference being you order whatever tickles your fancy. You walk around trying to balance what you have snagged in your hands with hopes of getting it in your mouth before it hits the floor.  When various items of food are found on the floor, on the couch, on the end table, and other non-eating areas,  they all quickly deny any wrong doing.  It seems all the food I am scraping off various surfaces magically appeared--or perhaps the family that is hiding in the attic is creating this mess.

AND the dog--he is one step away with his drooling mouth following the crew around waiting to pounce.  If a cartoon gets turned on, he is licking his chops waiting for someone to put their bowl/plate down for 2 seconds of distracted fascination so he can grab and run.  I found a hardened waffle at least half a dozen times during my stay.  He would re hide it every time he got it--his squirrel like stowing probably in the event of no further roaming and eating policy.

I am back home--and when I went by today--Dr. Daddy was cracking the whip.  Eat this or no snack policy was being threatened.  Oh--he only made the threat after having to make the next choice after one bite of their first.  It seems the peanut butter and jelly was too runny.  WELCOME TO MY WORLD-DR DADDY!

Back here in the bungalow, I am eating baked potatoes and peanut butter sandwiches.  It just is NO FUN cooking for yourself!

But from everlasting to everlasting the LORD's love is with those who fear him, and his righteousness with their children's children--
Psalms 103:17
Posted by lulu at 6:00 AM