Here in the Hood 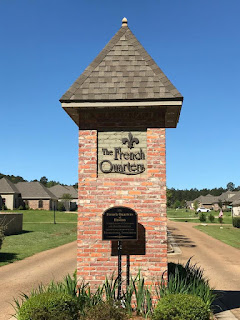 we are surrounded by woods and cut-overs.  Though I could easily sprint to the Parish Sheriff's Office, there is no sign of civilization from our front porches and back yards.  I truly live in the city (part of the city tax base), have all the benefits of nearby services and shopping and yet have the feel of living in the country. 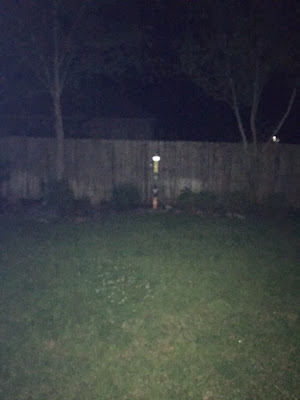 We live in a beautiful small neighborhood with street lights more for esthetics than security.  When I take the Wonder Dog for his final walk of the day, it is always pitch dark outside.  The glow from the windows and porch lights are our trail markers and heaven help if a snake is in the road since the black asphalt blends into the night sky.  Still that walk has to happen every night.

This past weekend we were walking up the street toward the houses with the cutover behind them.  We often hear coyotes here, but this particular night they seemed to go crazy.  Barking, whining, snarling ~it was a symphony of a large pack of coyotes.  It had me concerned since they seemed to be heading our way.  I envisioned a pack of coyotes spilling out into the hood looking to attack.  I swept the wonder dog up and headed back to the house.  Danger seemed to be hiding just beyond those back yards as the chorus of yelping crescendoed.  We were headed for the safety of cover out of the path of the evil lurking in the night. 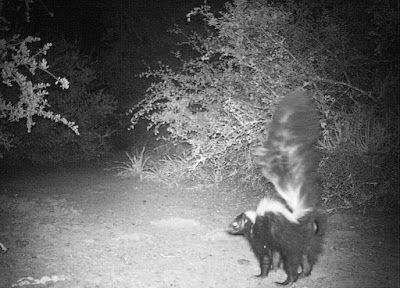 The next morning brought a beautiful cool spring day.  The first order of every day is the wonder dog's walk.  Walking out the garage door, I was immediately hit by the sure scent of Mr. Skunk.  Exiting the garage, we were slapped in the nose by the strong sulphuric stench hanging over the hood like a blanket of fog on the morning after a rain.

The bells in my head immediately went off.  What I had thought was a snarling pack of coyotes in search of their midnight snack (Hero), was not that at all.  I am pretty sure the coyotes out for their late night stroll happened upon Mr. Skunk and decided to investigate.  What I heard was their reaction after the blanket spraying of the pack.  Something tells me there was a great deal of rolling in the dirt and plunging in the creek by said pack after their late night skunk spray.

Look at the story of Ruth.  Boaz cautioned Ruth about not allowing others to see her as she left after a night at his feet.  How quickly she could have been judged by those who saw her leaving in the early morning hours.  Wagging tongues could have destroyed Ruth's reputation and literally caused her death by stoning.  How quickly we rush to judge--without knowing the whole story.  How unfair our accusations can be.   Perhaps it is a ploy to deflect from our own sinful ways to point out the seeming sin of others.  There is usually much more to a story than what our eyes tell us.  Keep in mind before starting or sharing a rumor, the tables can easily be turned and you can become the subject of a story.  Beware the spray of stench which comes from the spreading of gossip.

"Hypocrite!  First get rid of the log in your own eye;

then you will see well enough to deal with

the speck in your friend's eye. "